White hot rage built in me the longer Todd Haynes’ latest film, Dark Waters, went on. This is a shocking story of corporate greed at the expense of humanity. It’s a slow burn. Nothing happens quickly. Obstacle after obstacle is put in the way of full disclosure and redress. 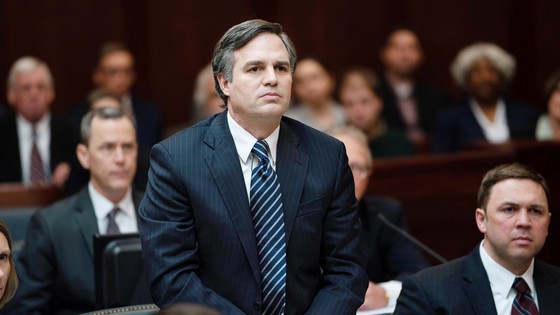 The film has much in common with Erin Brockovich (2000). It’s based on a New York Times magazine article titled “The Lawyer Who Became DuPont’s Worst Nightmare” by Nathaniel Rich. It chronicles a one-man crusade seeking justice for a community exposed for decades to toxins.

Corporate environmental defence attorney Rob Bilott (Mark Ruffalo) has just made partner at his prestigious Cincinnati firm. This is in large part due to his work defending some of the biggest names in the chemical industry. When Wilbur Tennant and his brother Jim, two West Virginia farmers, ask for his help investigating the local chemical plant for purportedly killing their livestock, he balks, explaining that he represents chemical companies, not plaintiffs. Yet, something about their story stays with Rob, especially when he recognises that one of his fondest summers as a boy was spent at a neighbouring farm. During a drive to the area, Rob’s observations don’t quite align with his memories.

The Tennants believe that whatever DuPont is dumping into their landfill is polluting their creek and has wiped out their herd of nearly 200 cattle. Supported by his supervising partner at the firm, Tom Terp (Tim Robbins), Bilott files a complaint, undertaking a targeted lawsuit that will uncover just what is happening in Parkersburg. Years later, Bilott finds that his obsession to ferret out the truth has not only jeopardised his family, particularly his relationship with his wife, Sarah (Anne Hathaway), but also his reputation, his health and his livelihood.

Ruffalo is perfectly cast as Bilott. The character is a dogged, dour, corporate type who is brought to see the light. Hathaway, too, is excellent as his supportive wife, Sarah. Her role really comes into its own in the run home, when Sarah has to stand up for what she believes in. It is great to see Robbins – fine actor that he is – back on screen, portraying the managing partner of the law firm. Around them the secondary players provide ample opportunity for the audience to appreciate the David vs Goliath struggle that is going on here.

I left the cinema appreciating having seen such injustice portrayed on screen, but also scared witless about what companies are prepared to do with at such a contemptibly high price.