A look at a way of life that’s all but gone, Honeyland focuses on a pragmatic and resilient woman who faces an unexpected challenge. 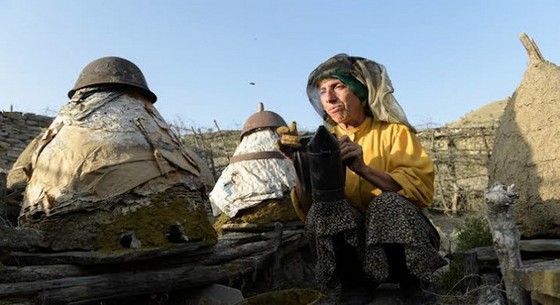 Nestled in an isolated mountain region deep within the Balkans, Hatidze Muratova – a woman who has never married and is in her mid 50s – lives with her ailing 85-year-old mother Nazife in a village without electricity or running water. Nazife, who has been bed-ridden for four years, is blind in one eye and paralysed, so she’s unable to leave their ramshackle hut. Hatidze is the last in a long line of Macedonian wild beekeepers, eking out a living farming honey in small batches to be sold in the closest city – a 20-kilometre train ride away.

Hatidze’s peaceful existence is thrown into upheaval by the arrival of an itinerant family with a brood of rambunctious children and a herd of cattle. She tries her best to adapt to the change in circumstances and offers her tried-and-true beekeeping advice. It doesn’t take long however, before Hussein – the itinerant family’s patriarch – senses opportunity and develops an interest in selling his own honey. Hussein has seven young mouths to feed and nowhere to graze his cattle and he soon casts Hatidze’s advice aside in his search for profit.

This causes a breach in the natural order, provoking a conflict with Hatidze that exposes the tension between nature and humanity, harmony and discord, exploitation and sustainability. Even as this family provides a much-needed respite from Hatidze’s isolation and loneliness, her very means of survival is threatened.

The debut feature from documentarians Ljubo Stefanov and Tamara Kotevska, Honeyland was shot over three years by a skeleton crew committed to an intimate collaboration between filmmakers and their subject. They’ve done a remarkable job, providing great insight complete with some striking visuals from Feimi Daut and Samir Ljuma which capture the harshness and the beauty of the terrain.

Honeyland is both a tough and tender portrait, a glimpse at a past which has all but disappeared and a testament to one extraordinary woman’s resilience. Much doesn’t need to be said. Rather, the visual narration that speaks volumes. Those featured in Honeyland are understood through their body language and their relationships, as well their emotions, which come to the fore.

Slow moving but fascinating, the documentary will have greatest appeal to cinephiles. It is cinéma-vérité of the highest order and was understandably nominated for a 2020 Oscar for Best Documentary Feature.