It’s Halloween, so we’re checking out a little spooky action with the Netflix movie, Vampires vs The Bronx. This fun excursion into the supernatural won’t test your brain, but never wears out its welcome.

Director Osmany “Oz” Rodriguez has an impressive CV in television, notably on A. P. Bio and Saturday Night Live. And he channels that comic energy into the longer format. You’d think, being 2020 and all, Vampires vs The Bronx might tap into the familiar vampires-as-contagion trope. But Rodriguez and co-screenwriter Blaise Hemingway (Playmobil: The Movie) take aim at a different target – gentrification. 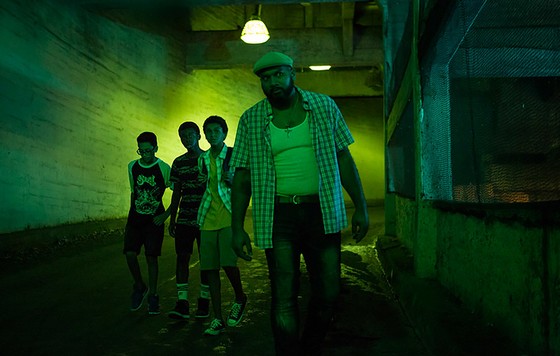 The film follows the misadventures of three pre-teen friends – resourceful Miguel (Jaden Michael), conflicted Bobby (Gerald Jones III) and nerdy Luis (Gregory Diaz IV). Like many in their Bronx neighbourhood, the boys have noticed a stack of buildings being bought by the shadowy Murnau Corporation (geddit?). But Miguel has other things on his mind trying to organise a block party to try to save a beloved bodega run by Tony (Joel “The Kid Mero” Martinez) from closing down. He receives some good news when new resident in the neighbourhood Vivian (Sarah Gadon) offers to distribute his flyers around her building.

Bobby meanwhile has been on the fringes of a criminal gang run by Henny (Jeremie Harris). Thankfully he isn’t in too deep, but the danger is there. But a chance encounter with Henny’s gang changes everything. Miguel accidentally messes a jersey worn by Henny’s offsider Slim (Germar Tarrell Gardner). Miguel takes off and Slim gives chase. When Slim follows Miguel into an abandoned building, he makes a fatal mistake. A vampire – Alexis (Adam David Thompson) – attacks Slim, killing him on the spot. Miguel witnesses the gruesome scene from a safe hiding place. Now The Bronx has bigger problems than shady real estate deals. Vampires are roaming the streets!

Rodriguez keeps Vampires vs The Bronx bubbling along with a heady mix of action, humour and horror. Maybe “horror” is a bit strong, because I never felt scared watching this film. It actually has a bit of a Ghostbusters vibe going on, with the comedy played up over the other elements. The film certainly skewers the creeping gentrification of the neighbourhood. Perhaps oddly though, his characters don’t seem to see it as a huge threat, preferring to cash in – even if they’re unwittingly selling to vampires. Rodriguez’s digs at hipster culture (at one point Tony starts stocking kale and “milked almonds”) are slyly amusing. But his handling of the vampire stuff is very funny.

Vampires vs The Bronx is a modest film by Netflix standards. It doesn’t seem to have the budget of, say, The Old Guard. Most of the special effects are relatively simple CGI. No digital buildings are destroyed. But it more than makes up for that with its cheeky energy and some fine performances.

Vampires vs The Bronx is never going to be in the horror canon. But if you’re in the market for relatively light Halloween fare, give it a go.