Not all superheroes wear capes. Some are immortal ass-kickers. The Old Guard is a high-concept action-thriller that provides an origin story for what the producers no doubt hope will be a tentpole franchise in the future.

The Old Guard was originally scheduled to be a high-profile summer release in the northern hemisphere; but the pandemic put a stop to that. Like many other such films, it’s popped up instead on streaming (in this case, Netflix). Aspects of the film certainly suggest it was intended for a cinema audience, but it nonetheless works in the smaller format. 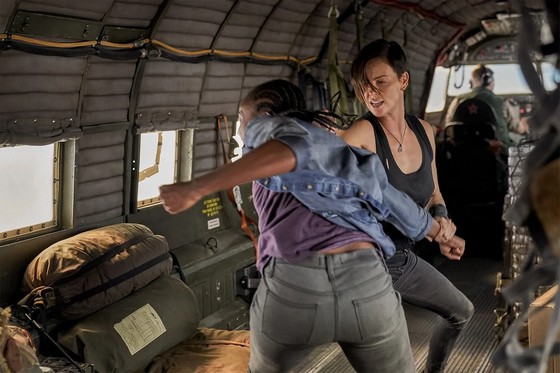 Andy (Charlize Theron) leads a small team of mercenaries. The group comprises Booker (Matthias Schoenaerts), Joe (Marwan Kenzari) and Nicky (Luca Marinelli). They’re hired by ex-CIA operative Copley (Chiwetel Ejiofor) to rescue a group of schoolgirls kidnapped by militants in South Sudan. But when the team breaks into the supposed compound, they’re gunned down by a team of soldiers. Thing is though, Andy’s team are immortal warriors, so they soon revive and mow down the soldiers. The whole thing was an elaborate ruse orchestrated by Copley for the benefit of pharma boss Merrick (Harry Melling). Convinced by video of the incident that immortal humans exist – and acutely aware of the financial rewards they could bring – Merrick hires Copley to capture the team.

Meanwhile, in Afghanistan, US Marine Nile (KiKi Layne) is leading a squad searching for Taliban fighters. The encounter however goes south when the suspected militant slashes Nile’s throat with a knife. Miraculously, not only does she survive, but the next day she wakes with not so much as a scratch. Andy and her team have had a dream involving Lane (she’s had a similar dream about them), and they track her location. Just as Nile is about to be shipped off to Germany for further “treatment”, Andy busts in and kidnaps her. Now Nile faces an uncomfortable realisation – and a choice.

Director Gina Prince-Bythewood keeps a tight rein on the material. But she and writer Greg Rucka (adapting his own graphic novel) give both the story and the characters room to “breathe”. Unlike recent Netflix hit Extraction, The Old Guard isn’t merely a long action sequence bookended by exposition. Prince-Bythewood takes the time to explore some deeper concerns. Those concern the role of “big pharma” in modern life, and the effects of unethical (even ruthless) exploitation. Indeed, perhaps the script telegraphs its concerns a little too clearly. The pharmaceutical company in the film is named Merrick – maybe uncomfortably close to the real-life Merck group.

It also posits a rather uncommon take on the superhero stereotype. We all know the “with great power comes great responsibility” mantra; but The Old Guard looks at superpowers as a curse (in much the same way as recent cinema has approached other folklore like zombies or vampires – see Only Lovers Left Alive, for example). This is unusual, but not unheard-of – Christopher Nolan’s Batman trilogy adopts a similar approach. And it’s hinted at without really being fully explored in Avengers: Endgame.

Despite its more thoughtful approach, the film is still quite violent. It features all manner of shootings, martial arts and swordplay. It might not necessarily be all that gory, but it’s certainly not PG.

Charlize Theron (Tully) enhances her rep as an action movie lead with a strong performance as Andy. Her acting chops are undeniable, but her physicality adds another layer to the material. KiKi Layne (If Beale Street Could Talk) seems determined to follow in Theron’s footsteps as Nile; though she manages to introduce appropriate levels of vulnerability and self-doubt into the character. Matthias Schoenaerts (Red Sparrow) scores perhaps the most interesting role as the conflicted Booker. Marwan Kenzari (Aladdin) and Luca Marinelli (The Great Beauty) lend solid support but are (literally) sidelined for much of the film. Chiwetel Ejiofor (Doctor Strange) also takes advantage of some ambiguity in the character of Copley, while Harry Melling (The Keeper) is left to revel in the snivelling bad-guy role as Merrick.

The ending of The Old Guard strongly hints at at least one sequel, if not more. Based on this outing, I’m sure I’m not the only one who’d be happy to see more of these characters. For now though, Prince-Bythewood delivers a charismatic superhero romp with more going on than you might expect.

The Old Guard is now showing on Netflix