Michael Robotham’s crime novels have always had an easy grace about them, somehow managing to be dense works without appearing to be so.  As with all second novels, the second novel of a new series has much on the line in proving to fickle readers that their leap of faith into new territory was warranted.  We visit again with criminal psychologist Cyrus Haven in When She Was Good. 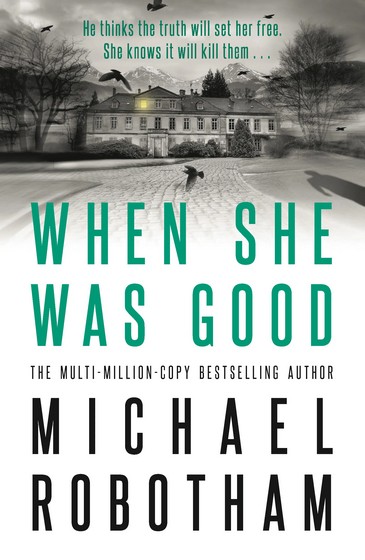 Evie Cormac, the infamous ‘Angel Face’, is now approaching legal age in which she will soon be processed out of the failing model that is the British foster home system.  Evie is still keeping her secrets. She never intends to reveal the circumstances that led her to being secreted in a building that also contained the tortured body of a very large man.  Evie’s true identity and her origins remain a mystery even to the one person she has allowed to get close to her, the contradiction that is psychologist Cyrus Haven. Cyrus is convinced that what will most help Evie is her facing and processing the truth of her traumatic past.  Cyrus Haven himself has also experienced significant family trauma and has not shied away from the perpetrator of such violence, his mentally disturbed brother.

As Cyrus makes contact with the trainee police officer who found the grubby but beautiful child six years ago when more experienced officers could not, he discovers that she too has reason not to speak further.  Powerful people are still trying to find the whereabouts of ‘Angel Face’ and it is made clear to Cyrus that they will never give up in their efforts to silence Evie permanently.  She has good reasons to be afraid of being found.

As with most well-established authors of a certain tier, new works are inevitably compared to the giddy days of their earliest published successes when we all jumped on the bandwagon and binged whatever had flown under our radar up to that point.

Author Michael Robotham has given the reader in When She Was Good many more insights into what shaped the mysterious Evie Cormac into the prickly and distrustful teen we first met in the 2019 novel, Good Girl Bad Girl.   Both Evie and Cyrus are complex, and the bond the two of them have is tested by the inevitability of what will happen if Evie’s past catches up with her.

When She Was Good features the alternate viewpoints of Evie and Cyrus, with neither character ever sliding into the territory of being considered pathetic or beyond redemption.  These two are survivors, and it takes the experiences of one to be able to deal with imminent dangers that continue to threaten the life and sanity of the other.

As darkly beautiful as a crime novel can be, When She Was Good pushes the reader onwards in a desperate need to reassure themselves that the good will see out the bad, even if the lines between are both well trodden and muddied.

When She Was Good is published by Hachette Australia.