Chris Hemsworth throws off Thor’s cape to become a different kind of super-hero (or perhaps anti-hero) in Extraction. This by-the-numbers actioner is about a straightforward as you can get. But Sam Hargrave’s kinetic direction and a script from Hemsworth’s old pals, the Russo brothers, propel it along at breakneck speed. So what it lacks in intellectual heft, it makes up for in sheer brutal energy. 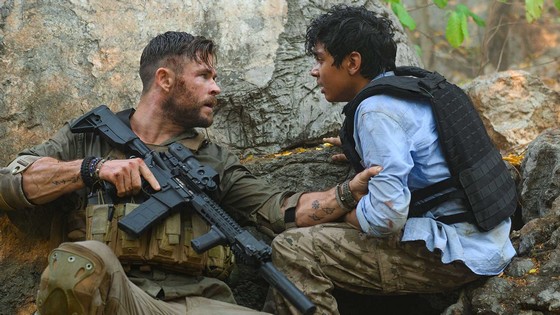 Hemsworth plays the fabulously-named Tyler Rake, a gun-for-hire who’s part of an international team of mercenary “fixers” led by Nik Khan (Golshifteh Farahani). The team have been called in by Saju (Randeep Hooda) the head of security for a jailed Indian drug lord, Ovi Majahan Snr (Pankaj Tripathi). It seems the drug lord’s son, also named Ovi (Rudhraksh Jaiswal) unwisely met up with some friends and is now held captive in neighbouring Bangladesh by a rival drug lord, Amir Asif (Priyanshu Painyuli). The team have to snatch Ovi from the gangsters in Dakar and get him to an extraction point for a flight to safety. But a series of double-crosses literally blows that plan up. On the run with Ovi in chaotic Dakar, Rake has to come up with an alternative. But Amir Asif’s control over both street gangs and the local military commander mean getting out won’t be easy.

While the plot is simplicity itself. Basically, Joe and Anthony Russo use a four-act structure, each act built around a big action set-piece. That leaves precious little time for any character development. The film feels like one relentless chase, with barely a breather. So its hardly going to tax your brain. But the Russos deserve props for two things – setting the action in an often-overlooked part of the world; and allowing Hemsworth to actually play an Australian in a movie.

Although – obviously – you can only get this via streaming at the moment, a word of warning. Extraction is brutally violent. Bullets fly, blood spatters and grenades thud.The body count is enormous (Rake seems to single-handedly massacre about half the Dakar military). So if you’ve got kids in the house, it might be an idea to wait till they’re in bed before flicking this one on.

Hemsworth brings impressive physicality to the central role of Rake. I mean, the guy knows his way around an action movie, so I expected nothing less. But even though the script constrains him, he manages to convey what the character is about, even finding a glimmer of emotion in him.  Rudhraksh Jaiswal is similarly limited as Ovi – getting little to do except look scared and run. Randeep Hooda impresses as the conflicted Saju. But Golshifteh Farahani just about walks away with the film as the smooth, calculating Nik.

Extraction promises a bucketload of straight-up action – and delivers. This is disposable entertainment; but it’s irrepressibly energetic.

Extraction is now showing on Netflix