Booker Prize winning author Aravind Adiga takes on the issue of refugees and asylum seekers, focusing on Australia in his latest novel Amnesty. 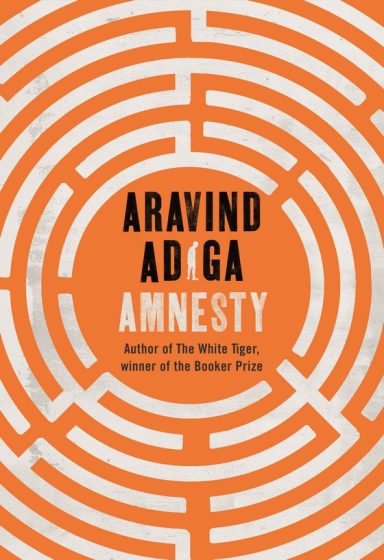 Set in Sydney, on a day sometime in the recent past, the book concentrates on Dhananjaya Rajaratnam, aka Danny the Cleaner, as he grapples with his duty to society and his desire to stay in Australia.

Danny lives between the cracks in modern Sydney. His home is the backroom of a small grocery store and he works as a cleaner for cash, giving half of his takings to Tommo, the man who owns the store. After a harrowing run-in with Sri Lankan security forces, Danny came to Australia as a student with the promise of residency at the end of his studies. But the course turns out to be a form of indentured servitude and he drops out and overstays his visa, in so doing becoming an illegal immigrant.

Ironically, of course, because Danny flew to Australia on a student visa and did not arrive by boat, despite his experiences with the Sri Lankan security forces, he cannot claim to be a refugee. But despite all of this Danny has made a kind of life for himself. He has work, he has a girlfriend and he has some companionship, even if it is mainly with other illegal immigrants who also hang around the local library. But then this existence comes crashing down.

While cleaning one apartment, Danny learns of the murder of his client in an apartment nearby. That client, Rhada, had a lover, Prakash, who Danny also cleaned for. Danny immediately suspects Prakash of the crime. Instinctively he calls Prakash and sets in train a cat and mouse game between the two of them — Prakash knows Danny is illegal and threatens to expose him. Adiga then follows Danny as makes his way around Sydney, wrestling with his conscience and dealing with the increasing pressure from Prakash.

Amnesty is a morality play that also digs deep into the refugee and immigrant experience. Not only illegal immigrants, but the legal, too. How cities like Sydney, cosmopolitan and multicultural on the outside, can embrace you but still feel alienating for those who do not conform to the Australian norm. Danny feels this, as he slips through the world invisibly:

Adiga lived in Sydney for a while and it shows. He brings an eye to the city which captures it from an insider/outsider’s point of view. While Danny spends most of his time deep in the city, hanging around Central Station or in the narrow streets of the inner suburbs (Glebe, Newtown, East Sydney), he gets glimpses of Sydney Harbour, or recalls walking with his girlfriend Sonja along the Parramatta River. Adiga rediscovers and recontextualises Sydney landmarks from Danny’s point of view, giving the city a fresh and different feel:

Adiga is not only interested in the exteriors. Through his relationships with others – Tommo, Sonja, Rhada, Prakash – Danny also explores the interiors of Sydney – the apartments he cleans, the pubs he is taken to, the convenience stores, the libraries that provide a sanctuary for him.

While the year is never stated, there are hints that this is not exactly present-day Sydney. Danny is receiving messages on his phone about the switch from 2G to 3G, he uses paper tickets on the bus rather than the more recent Opal card system. This places the action a few years ago, when Sri Lankans were more likely to be trying to come to Australia — by boat or any other means.

Driving this all is the morality play, occurring in ‘real time’ over the course of a day, with each new section marked with a time stamp like an episode of 24. Danny knows that Prakash is likely to have been involved in Rhada’s death; Prakash has told Danny he is leaving the country that evening so the clock is ticking, but Prakash also knows Danny is in Australia illegally and has threatened to tell the authorities. So as he makes his way around Sydney, Danny is also at war with himself and his vision of himself as a righteous person, despite his illegal status. And by playing the story this way, Adiga puts the reader in this position also. As the time ticks down, the question is always – what would you do?

As with many other recent books that deal with the global migration issue, whether fiction or non-fiction, Amnesty aims to put a single face to a bigger issue. To humanise a group of people who have been systematically dehumanised to justify the hardening of our national response. To ask readers to, if not empathise, then at least try to understand that these immigrants are also human beings with dreams and aspirations much like their own. And to understand that in some ways we ride on the back of this phenomenon – often exploiting those who have no choice but to accept that exploitation or face a worse fate.

The story Amnesty tells is not just an Australian one, but Adiga makes the most of its Australian setting, delivering a strong sense of both the place and the culture in which Danny finds himself, as well as the ways in which he desperately tries to fit in, to make himself invisible and survive from day to day. While many Australians laud the hardening of our borders, it is important to reflect on what we have lost, both in terms of our own humanity and in the potential of those who want to settle here. Amnesty provides space for that reflection.