Not to say that the character of Tony Johnson in this new season of After Life is now a loveable huggie bear moosh, but he’s not a patch on the acerbic purveyor of un-asked for wisdom that we encountered in Season one of After Life either.  Season two has a tall order to fill. 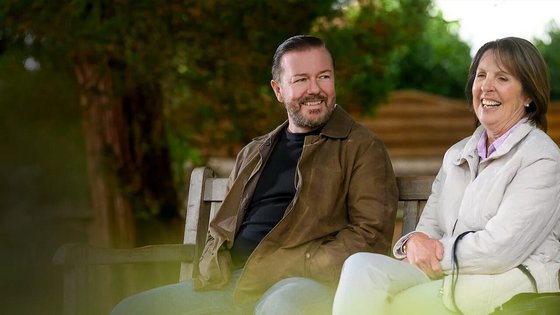 As he has a dog he needs to walk and feed, Tony (Ricky Gervais) gets out of bed and lives each day at a time.  His job as a reporter for the small local newspaper gets him out of the house and he continues to earnestly try to broaden his outlook on a world that had become unbearably bleak with the loss of his great love, wife Lisa (Kerry Godliman). Finally realizing that he’s not the most pleasant person to be around, Tony has moved on from picking apart every single encounter that he has and attempts to discover how the people in his life can be happy when he sees that they have so little to be happy about. Things haven’t rocketed ahead into complete sunshine just yet, but the seeds have been planted.

Tony finds himself a reluctant intermediary between his annoyingly obtuse postman Pat (Joe Wilkinson) and his friend Daphne (Roisin Conaty), and takes a greater interest in what is going on in the office of the The Tambury Gazette.  The Gazette is under threat, and Tony takes it upon himself to turn the fortunes of the humble paper around in order to keep those he realizes he cares about safe and secure, just as they once did for him.

There was so much emotion packed into the first season of After Life that it was always going to be hard to replicate that intensity once again.  If you are coming in fresh to this show, you may think its impossible for a forthright talker like Ricky Gervais to rip your heart right out of your chest. The first season of After Life proved that the gold isn’t always in flowery speeches and good acts, it can also be found in a grumpy middle-aged British man with many axes to grind against the world.

After Life S2 is all about the desire to do better and evolve after catastrophic loss.  Swimming a little, sinking a lot. It felt at the end of season one that Tony had done all he needed to do, so eking out the home videos and tears again in this season seems a bit overblown and unnecessary.  Sub plots that were worth further exploring are not all here, so it does feel like a little too much has been held back.  A good example of this is would be finding out the full story behind the Ann (Penelope Wilton) the widow who sits graveside with Tony and commiserates whilst dispensing sage advice and comfort. These little vignettes of solidarity are the sorbet of the show, and provide Tony with a pause moment in his day to think about how best to proceed, and perhaps about how to do better.

We did need this second series, as there was the need to check in again with Tony and see that he was okay.  The wildly inappropriate residents of Tambury each have so much to offer comedically that it seems a shame for Tony not to mess around with their sensibilities at least one more time.

The essential take-home from After Life Season Two remains the same.  In Tony’s words:

“Being in love is everything.  You don’t need anything else”

If you knew your loved one wouldn’t be around tomorrow, wouldn’t you dance with them today?