It is hard to believe we are already up to Season Four of The Last Kingdom, which was an unexpected and scorching debut success for Netflix back in 2015.  Tapping into perhaps a younger market than its genre contemporaries, The Last Kingdom was enthusiastically landed upon for its promise of deliciously nasty royal skulduggery and gloriously bloody battles, horse and broadsword style. Happily, The Last Kingdom has always produced. 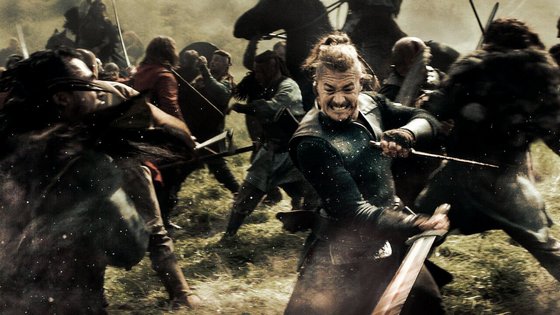 It would be a fair cop to say that The Last Kingdom is Vikings lite and it could also be argued that the two shows have always had an entirely different target audience in mind.  The Last Kingdom is based on a series of books by British author Bernard Cornwell, featuring the heroic creation that is Uhtred of Bebbanburg and inserting other fictional characters also around real life events that shaped Britain in the ninth century.

Uhtred (the flinty eyed Alexander Dreymon) is loosely based on Uhtred the Bold, a real life figure (and ancestor of Cornwell) who lived a hundred years after the time of Alfred the Great, the unifying English King around whose reign the first three seasons of The Last Kingdom is orientated.  Season Four is the first season without King Alfred, so we return once again to Uhtred’s main mission, which is the reclaiming of his Saxon ancestral home, Bebbanburg. Bebbanburg (or Bamburgh, as it is called today if you’re up for a bit of post viewing googling) was a key seat for an English King to master, being a gateway for marauders heading for the Kingdom of Wessex.

Captured by the invading Danes as a boy and raised as Uhtred Ragnarsson, Uhtred has always had the duality of being both Saxon and Dane and yet not being fully accepted by either race.  As Uhtred battles scheming Ealdormen, vengeful monarchs and his own youthful arrogance, the dream of the late King Alfred to restore Northumbria to greatness by the unification of the seven great Kingdoms is always a factor in Uhtred’s plans for personal vengeance.

Gathering up his kids for the ride, Uhtred once again rides into outlaw territory with his loyal men (which boils down to only three it seems) to save the daughter of his lady love Ethelflaed (Millie Brady) from being married off child bride style to seal new alliances forged by the young King Edward (Timothy Innes).  King Edward, son of King Alfred, battles with the legacy of his Christian father and is now at odds with his mother the Lady Aelswith (Eliza Butterworth).  Something has to give.

Despite some quite seriously cringeworthy scriptwriting, viewers have largely stayed with the show out of affection for its regular characters. With its largely unknown cast producing some stellar work – making silk purses if you will out of the lines they have been asked to deliver – The Last Kingdom has reached some unexpected heights in its storytelling thanks to their skills. There has always been a bit of a push and shove with The Last Kingdom between being historically accurate and embellishing to ramp up the entertainment value.  A good example of this is the ‘rent a crowd’ feeling of its battle scenes, which often simply do not have enough people in them to be convincing.

There is a lot of wooden acting here by its lead. Scenes that are meant to be passionate statements about loyalties and ambitions come out sounding quite comical thanks to how mechanically they are delivered.  Uhtred is a lighter haired, more pared back creation than the blackhaired warrior he debuted as in Season One but remains the compelling star of show that does an earnestly good job of making a bloody period in England’s history come alive.

Uhtred, son of Uhtred, who also made his own Uhtred (trust me, you will get a lot of laughs out of this in the intro each and every time) and his escapades have not yet been renewed for a fifth season but there is the sincere hope that the series will continue. Events in the series have diverged from the Cornwell books but thanks to both fiction and history, there is plenty of scope yet for The Last Kingdom.

The Last Kingdom is largely filmed in Hungary on a huge medieval set created near Budapest for period productions.