John Hyams’ psychological thriller Alone has twists aplenty. This two-hander set in the Pacific Northwest kept me engaged throughout. 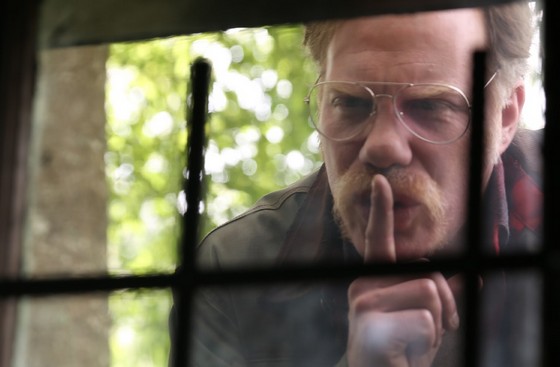 Six months ago, Jessica (Jules Willcox) lost her husband in tragic circumstances. Now she’s decided to move away. Her parents were going to help her pack, but she decided to do it alone and avoid especially her mother’s scrutiny. Hitching a closed trailer to her car, she is on her way. But on the long journey a strange thing happens. She is almost killed in an unlikely incident involving another vehicle, in which the driver – who she can’t make out – appears to be taunting her. Shaken, Jess is increasing alarmed as that man (Marc Menchaca) and his car seem to be everywhere she is.

At one point, he introduces himself to her, but Jess is wary. She has every reason to be because he is an unhinged individual who sees Jess as his plaything. Before this is over, she is in for the fight of her life. As the story develops, we learn a little more about her husband and his family, who have no idea what he’s been up to. The screws are turned tightly, and Jess will have to show her resourcefulness and inner strength to try to survive her ordeal.

Credit must go to writer Mattias Olsson for crafting such a compelling narrative and Hyams for maintaining the tension. Both understand the genre and make the most of that insight. Indeed, Alone is a remake of Olsson’s Swedish thriller, Gone (2011).

I thought the two leads played their parts well. Willcox (On the Rocks) captured the fear and resilience of her character, while Menchaca (Ozark) combined evil intent with boldness and craftiness. The diversity of settings – including bushland and rapids – aided the cause and were well captured by cinematographer Federico Verardi. The soundscape boosted the atmosphere around the travails of the antagonists.

The best of this genre not only keep you guessing but have a sense of dread and impending doom throughout. Alone moves down that path.

Alone is opening in select cinemas and can also be accessed via Foxtel and Fetch.