As fluffy as the soufflé at Le Récamier and a glitzy as the nightly light display at the Eiffel Tower, Emily in Paris is another charming but shallow TV series from the doyen of charming but shallow, Darren Star. This is Star’s first outing for Netflix, with his New York-set companion piece Younger streaming on Stan.

Emily in Paris serves as a star vehicle for British actor Lily Collins as the eponymous Emily. The show is basically an American’s conception (dream, maybe?) of what it would be like to live in Paris. It’s a world where a young American working a junior job at a marketing firm can afford to live in a chic apartment in the 5th Arrondissement, wear designer clothes and eat out every night. Despite her demanding boss, Emily can take leisurely lunches at swanky cafes, or meet friends in the Jardin des Tuileries for an afternoon chat. And her Parisian sojourns never stray beyond the Boulevard Périphérique. In other words, the show’s relationship with the real city is tenuous at best. 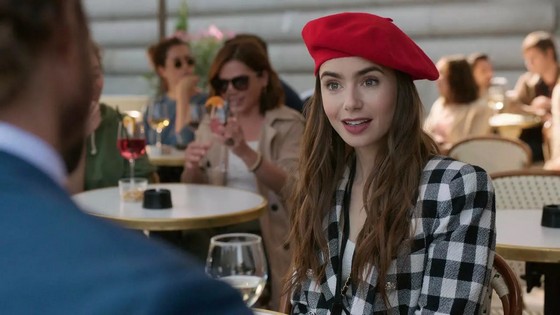 Star rhapsodises the tourist version of Paris. Sacré Coeur, the Palais Garnier, the Louvre and Cafe de Flore all get a run. Emily would never been seen dead in a place like The Eddy – the nightclub that provides the setting (and title) for Damien Chazelle’s far grittier Paris-set series – also showing on Netflix.

In the pilot, Emily is working for a Chicago marketing firm. The firm has acquired a smaller Paris agency, and Emily’s boss Madeleine (Kate Walsh) – who speaks fluent French – is heading there to show them “the American way”. But fate intervenes. Madeleine discovers she’s pregnant, and can’t take on the assignment. Before you can say sacrebleu, Emily (apparently a gun at social media but rather rubbish at French) is winging her way to la belle France to take Madeleine’s place. But Emily soon discovers it’s not all croissants and vin rouge. Head of the Paris firm, Sylvie (Philippine Leroy-Beaulieu) is a hard taskmaster; and doesn’t take kindly to being told what to do by some foreigner – especially an American.

Emily however soon discovers (to paraphrase L. P. Hartley) “they do things differently there”. Her provincial Chicagoan ways aren’t going to cut it in cosmopolitan Paris. But she finds compensations. She makes a friend in Mindy Chen (Ashley Park), another ex-pat adjusting to French life. And then there’s her downstairs neighbour, the hunky Gabriel (Lucas Bravo). Not only is Gabriel easy on the eye, he can cook (!) – seeing as he’s a chef at a nearby bistro.

Despite its setting, Emily in Paris shares many similarities with Younger. In both shows, the protagonist is trying to make her way in an unfamiliar world. They both initially struggle with their new careers but find unexpected successes. And they’re both attracted to unavailable men. But, hey, if it worked once, it’ll probably work twice, right? Well, I will admit I like this show even as I’m cringing at it. It exudes warmth and youthful optimism, at a time when that’s in short supply. Yes, it’s contrived and pretty silly, but many enduring TV series are (hello – Big Bang Theory anyone?).

Props though to the production team who showcase the very best of Paris in every scene. They make the city look amazing. And Oscar-nominated composer James Newton Howard complements the images with a jaunty score. With international travel all but impossible, the show serves as tourism by proxy – about the best we can hope for at the moment. If you’ve been to Paris, or just want to go, this will have you pining.

Lily Collins (Rules Don’t Apply) makes the show work. I suspect the show would fall flat without the bubbly personality and unshakeable confidence she brings to Emily. Her American accent seems spot-on (the actor is British), and she charms in just about every scene.  Philippine Leroy-Beaulieu (Mirage) provides the perfect foil as the world-weary Sylvie. Lucas Bravo manages to find some interesting facets to Gabriel, despite being primarily eye-candy.

Don’t come to Emily in Paris expecting any semblance of realism. This is a pure fantasy, and an American one at that. But at a time when even watching the nightly news bulletin is a chore, this shiny bauble could you be what you need.