Nardi Simpson’s scorching debut novel Song of the Crocodile opens with the irony of a sign naming the small Australian country town of Darnmoor the “Gateway to Happiness”. 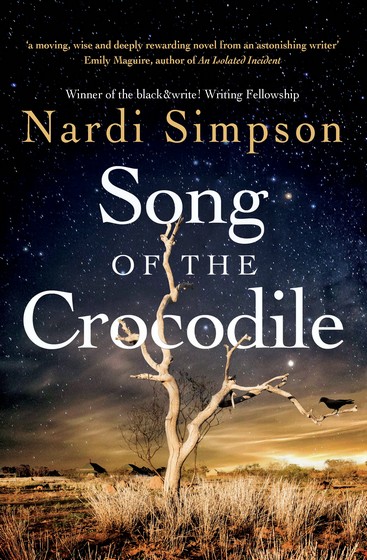 The fly-through that follows will be familiar to anyone who has driven around regional Australia. Two main streets crossing at right angles with a war memorial at their crossroads, a bunch of shops, a pub, a court house and police station. And then out of town, past the rubbish tip and on the banks of the river is the “Campgrounds” – home to Aboriginal community, the first people, exiled to the fringes of the town. Song of the Crocodile starts somewhere in the 1960s and charts four generations of the Billymil family and their struggle against the culture that is trying to crush them.

When the book opens, matriarch Margaret has been fired from her sheet washing job at the local hospital, accused of a crime that she did not commit. Not long after that, her pregnant daughter Celie gives birth on the night her son-in-law is killed for being in the wrong place at the wrong time. The bulk of the story then focuses on Celie who has to make a life for herself and her daughter Mili who herself is not only the subject of long held prejudices that hold her back but of casual sexual violence and later Patrick, her son from that encounter. But Simpson also runs a parallel narrative which takes readers to the world of the spirits, the place that the dead go to watch over those left behind. But there is danger here too, and it comes in the form of the rapacious, destructive Crocodile spirit that is stirring under the river bed.

Simpson’s sweeping novel captures the trials and struggle of Aboriginal communities in Australia in the second half of the Twentieth Century. Marginalised and discriminated against, then used as a workforce to destroy their own heritage and relocated when the town seeks to build a levee. The characters over time each represent a different relationship with the town community and with the authorities. While the protagonists are to some degree emblematic, Simpson infuses them with complex and individual personalities so that they never come across as archetypes or stereotypes. That said, the scope of this novel means that Simpson often skips quickly across the years at a fairly dizzying pace, leaving much of the detail behind to move to events that move the plot forward.

Song of the Crocodile is itself full of song and the Yuwaalaraay language of North West New South Wales. It presents an unsentimental but evocative view of the experience of Aboriginal communities and Aboriginal people, of the ongoing prejudice and the impacts of abuse and of inter-generational trauma. But rooted in the experiences of its protagonists, it also highlights the joy, the support and sense of community. Simpson grabs the reader’s attention from the her poetic but disturbing opening and keeps that attention throughout, delivering a heartfelt narrative that reveals worlds that have long been marginalised by mainstream Australia.