Mirage is a sparkling French-Canadian-German production that has a little of everything, and lots of what is essential to the success of a romantic thriller – sizzling chemistry between its two lead characters. 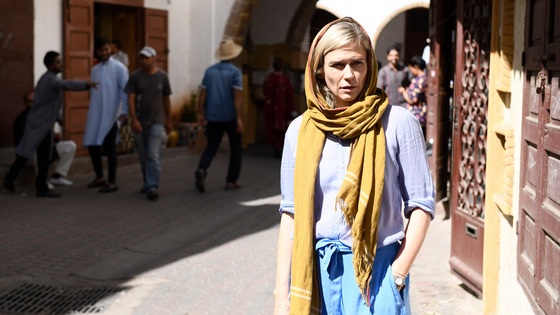 As Claire wakes up alone in her Thailand hotel room, she hears screaming.  Water is rising outside, and soon the panicked human traffic surging through the corridors forces Claire upwards, away from her hotel room she had been sharing with her lover, the gorgeous Gabriel.  No body is ever found, and Claire is forced to go on with her life without him.

Fifteen years later, Claire (Marie-Josée Croze) is making a new start of it all in Abu Dhabi. She is not alone, with husband Lukas (Hannes Jaenicke) and teenage son Zack (Thomas Chomel) in tow.  Lukas is trying to drum up investors for a new restaurant venture and Claire is a cyber security engineer, hired to oversee the security aspects of a new high rise construction project.

Zack is feeling like a fish out of water in this new country, and is thankful when two local teenagers tuck him under their wing.  Their escapades seem exceptionally dangerous in a country that is so strangled by archaic religious beliefs and drowning in entrenched corruption.

Claire had been hoping to be able to prove herself again after being made the scapegoat of an industrial disaster at a nuclear power plant. This professional failure haunts her still and is something Claire will never allow herself to forget.  Claire’s personal and professional lives both seem to be back on track, until the missing Gabriel (Vikings actor Clive Standen) reappears in her life. Not dead after all, and in serious trouble.  In order to stop another disaster happening on one of Claire’s projects, she must put aside her hurt and join forces with Gabriel, whom she discovers had another motive in getting close to her all those years ago.

Mirage is a ‘clash of cultures’ spy thriller and also a romantic thriller, with plenty of ‘will they or won’t they’ vibes underpinning the reunion of the two ex-lovers as they run about dodging bullets and secretly meeting up around the city.  Check your scepticism at the door as the dashing Gabriel endeavours to bring down his former employers whilst keeping Claire safe from their evil schemes of industrial sabotage.  Croze and Standen are mesmerizing to watch and sigh over as their characters dance the dance that you know can only end in one of two ways.

Abu Dhabi’s soaring structures emerging from the desert contrast with the bustling street scenes of the poorer quarters of this very rich city.  This is ‘old world meets new world’, and the meek acceptance of all as to how the city’s bureaucracy functions is illustrated by the plight of the Syrian refugee that Claire hires as her personal driver. Claire’s efforts to make connections in the entitled ex patriate community shows its underbelly, introducing not only herself but her husband and son to the schemers and climbers who have all come to Abu Dhabi with ambitions of their own.

As a spy thriller, Mirage is more flash than substance but it matters little as it is such a visual feast of a part of the world rarely seen in drama television. The powerful light of the city in the sand makes you wince for the actors as they act out their scenes next to blinding water and metal encased buildings.  Everyone in Mirage is glamorous and sin is everywhere despite the ever present threat of what can happen to someone who steps out of line with the over represented authorities of Abu Dhabi.  Phone calls are traced, spies lurk around every corner and there’s a whole heap of unsatisfied and jealous eyes willing to take advantage of the newcomers.

Mirage is a six part series streaming now on SBS on Demand.  Mirage was filmed on location in Abu Dhabi and also in Morocco.