Marcel Marceau was regarded as the world’s foremost mime artist. But I dare say many would be unaware of intriguing his back story, as covered in Resistance.

From his earliest, Marceau (Jesse Eisenberg) was driven to “perform”; something his religious Jewish father, Charles Mangel (Karl Markovics), railed against. There was a reason for that, which is explained in the movie. His dad was a butcher, like the generations before him and was angling for his son to follow in his family’s footsteps, but – as I just suggested – there was more to it than that. His mother and father had already fled Poland for France to try to escape the rising tide of antisemitism. 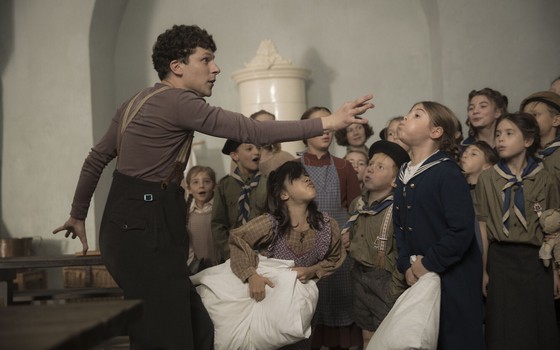 Marcel’s older brother Alain (Félix Moati) was heavily involved in trying to protect and resettle Jewish orphans, something that came to involve Marcel. He quickly showed he was adept at keeping the youngsters engaged and entertained. It also allowed Marcel to remain close to the “responsible” Emma (Clémence Poésy), who he had taken a shine to. As the situation worsened and the Jews moved to what at the time was considered safer surrounds, Marcel’s growing “awakening” to the horrors compelled him to increase his involvement. He joined the Résistance and he and Emma came face to face with the ruthless Klaus Barbie (Matthias Schweighöfer), the Butcher of Lyon, with cataclysmic consequences.

This film plots Marceau’s journey with the children he helped to save. It takes the form of a story told by Allied military leader General George S. Patton (Ed Harris) to his troops at the end of the war, ahead of inviting Marceau – by then a military liaison officer – to perform. The film contrasts Marcel’s buffoonery with the serious business at hand.

Although difficult to capture, Eisenberg (Zombieland: Double Tap) does his best to solicit the nuance required. Resistance also makes a point of highlighting the barbarity of Klaus Barbie, his viciousness captured by Schweighöfer . I also appreciated the performance of Markovics as Marcel’s father, a man trying to understand his son and adapting as best he can to the troubling times. Although not heavily featured, the orphans’ resilience – and one in particular, Elsbeth (Bella Ramsey), who is the focus of the opening scene – is another mainstay.

Resistance has impact from the get go, with a very strong and distressing start. Overall though, although compelling to a point, several of the pivotal scenes appear manufactured, rather than totally believable. Of course, all this is done for dramatic impact. The film also features a modicum of actual black and white war footage as a pointer to realism.

While hardly reaching the heights of the best Holocaust movies, Resistance – written and directed by Jonathan Jakubowicz (a Venezuelan Jew of Polish decent) – still paints a dark but illuminating portrait of the era. And that is not to overlook how a man best known for his silence spoke volumes with his actions.