In 2009, Heath Ledger won a posthumous Oscar for his remarkable performance as the Joker in Christopher Nolan’s The Dark Knight. Now, Joaquin Phoenix is destined for the 2020 Academy Awards in a similar guise, as the lead in Todd Phillips’ crime-thriller Joker. 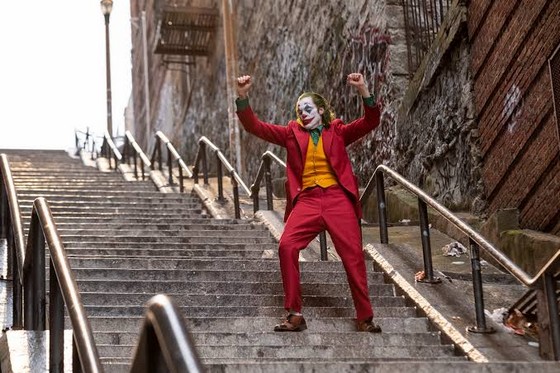 This is an unusual origin story set in the early 1980s. Joker isn’t Joker at the start, rather a tortured soul called Arthur Fleck, on seven different kinds of medication, who has spent time locked up and is struggling to make a living as a clown. When we first meet him, he is subject to ridicule by teenagers, who beat him black and blue. After that happens a fellow clown insists he take a gun for protection, which he is initially reluctant to do. Fleck has a mental condition that causes him to laugh uncontrollably at the most inappropriate times.

He dreams of a life as a stand-up comedian and forming a normal relationship with a single mother Sophie Dumond (Zazie Beetz) who lives down the hall from the shabby apartment he shares with his mother, Penny (Frances Conroy). He and his mum like watching a nightly TV variety show hosted by Murray Franklin (Robert De Niro), who begins his program with a comic monologue. Fleck’s life though is steadily unravelling. He is dealt a series of cruel blows that start to add up and play with his already shook up mind. He’s off his meds and slowly but surely he loses any sense of control, as his violent urges take over.

Talk about character acting! Phoenix is outstanding in one of the roles of his life – one you could mount a reasonable argument to say he was born to play. He transitions his character from brain damaged, victimised, downtrodden and embittered to empowered, subversive, enraged and totally deranged. For most of the movie he’s downright scary. It’s in his look, his movements and his facial expressions. De Niro, too, is in fine form – as natural as can be – as the affable and relatable television anchor.

The darkest of dark scripts has been magnificently written and realised by Phillips (War Dogs) and Scott Silver (The Fighter). It’s a detailed and telling back story, which is easy to follow. The depth and resonance of the score (by Hildur Guðnadóttir, who was responsible for music in the excellent TV mini-series Chernobyl) is as good as you are going to get in a film. In several chilling scenes the overarching sound of a double bass sets the tone, all but becoming a character in its own right.

Nothing Phillips has directed before (think The Hangover) stands up to this masterclass. One word … sums up what I thought of Joker: Wow! It is indeed a piece of cinematic brilliance.