What a top actor, Robert De Niro. Most of the films in which he played the lead, became film classics. Memorable roles that will still impress in decades to come. From Taxi Driver to Goodfellas. From The Deer Hunter to Casino. Unforgettable masterpieces. The only thing De Niro should have avoided in all these years is comedies. Besides Last Vegas there isn’t a single comedy (at least of those I’ve seen) with De Niro that I thought was worth watching. Lame humour and an irritating storyline are usually the biggest annoyances about such films: Meet the Fockers, Analyze That, and The Intern, just to name a few. Every time I felt vicariously ashamed. This is also the case with The War with Grandpa. 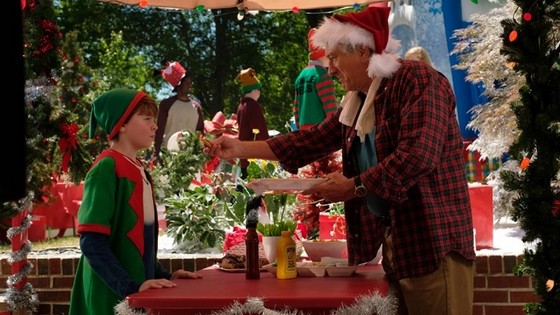 Let’s introduce grandfather Ed (Robert De Niro), who’s hopelessly left behind after the death of his beloved wife. Next, there’s the concerned daughter Sally (Uma Thurman) who wants her father to move in with her family, regardless of what the family members have to say about that. Husband Arthur (Rob Riggle) is again such a good-natured guy (and obviously Ed has nothing good to say about him) who looks at the whole thing with resignation and grudgingly agrees with the whole situation. Then there’s son Peter (Oakes Fegley) who’s screwed and reluctantly has to give up his beloved room. And this because grandfather’s legs refuse to work properly and so grandpa takes up residence there. Peter has to move to the dusty attic with a roof that’s not watertight and where unwanted pets run across the wooden truss. The eldest daughter Mia (Laura Marano) has the least problems since she’s living in her own teenage world. And finally, there’s the adorable daughter Jennifer (Poppy Gagnon). The only one who’s extremely enthusiastic about the new housemate.

You can already guess what’s going to happen after reading the title of the film. Yes, grandson Peter declares war on Grandpa Ed. The stake is the bedroom he had to hand over. At first, Ed finds it all highly amusing. The written declaration of war slipped under his door is treated with derision. And Grandpa Ed is willfully playing the game. It seems so innocent to him. I don’t think it’s going to be a surprise when it turns out that things start to get out of hand.

I thought it was quite astonishing that famous actors cooperated in this average family film. Robert De Niro, Uma Thurman, Christopher Walken, and Jane Seymour. Admit it, they are not the least. I suppose these actors would also like to experience a pleasant film set with a less demanding, relaxing role instead of a physically hard, intense one. Just like me wanting to have a peaceful moment in the midst of all the horror violence stuff I watch most of the time. The main subject being the clash between youth and the elderly in this movie seemed rather obvious. Unfortunately, there are other storylines that were added and not further explored. Like the love-hate relationship between the mother and her future son-in-law. Or the work situation of father Arthur. The only sidetrack that is usefully explored is the bullying of Peter at school. That was rather funny.

The rest of the film is a series of silly jokes those two arch-rivals are playing on each other. The pace at which these pranks follow each other is blisteringly fast. And they are of the level as the April Fools’ Day jokes. Replacing shaving cream with quick-drying foam or replacing cookie filling with toothpaste. Well, the movie has its charms. It’s a slightly corny comedy. A kind of mixture of Home Alone and Dennis the Menace. Obviously the film aims at a younger audience because my 8-year-old son next to me laughed a lot while watching. I’m afraid I’m not part of the target audience. I guess I belong to De Niro’s age-group. But nobody will ever ask me to play such a part.