In the tradition of Mafia movies like The Godfather (1972) and Goodfellas (1990) comes The Irishman. This tale is set around the fortunes of one man rising through the ranks of the organisation. And while the action centres on him, much of the plot concerns the fate of powerful Teamsters’ union boss Jimmy Hoffa. 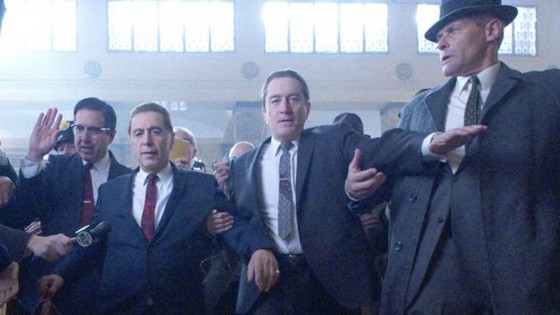 World War II veteran Frank “The Irishman” Sheeran (Robert De Niro) is a Philadelphia-based truck driver-cum-hitman. He meets mobster Russell Bufalino (Joe Pesci), who – coincidentally – helped Sheeran at a gas station some time earlier after his truck broke down. Bufalino gets Sheeran working in his crime family. That includes fixing a problem for Jimmy Hoffa (Al Pacino). Hoffa immediately warms to The Irishman and takes him into his confidence. Their families become close.

Hoffa likes the power of his position and isn’t used to compromise or being told what to do. On the other hand, Sheeran knows his place and understands what can come of rocking the boat. Hoffa’s tendency to shoot from the hip will inevitably cause him problems and Sheeran finds himself playing the role of intermediary.  Sheeran, who has four daughters, has a particularly uneasy relationship with one of them. She – Peggy – (played by Anna Paquin as an adult) has been privy to his propensity for violence (not towards her, but others) from a young age. Reclusive, she observes a great deal, but says little.

The movie primarily spans the 1950s to the ‘70s, but unfolds in flashback as the aging Frank Sheeran sits in a nursing home. Based Charles Brandt’s 2004 book I Heard You Paint Houses, the screenplay is by Steven Zaillian (Gangs of New York), with direction from Martin Scorsese (The Wolf of Wall Street).

To see three actors of the calibre of De Niro, Pacino and Pesci strutting their stuff on the big screen is a privilege. De Niro and Pesci are called on to give measured performances. Their characters are largely circumspect. Sheeran’s calmness when pumping bullets into his victims from point blank range belies his ruthlessness. Bufalino commands respect. By contrast, Pacino is required to be quite quirky and short-tempered as Hoffa. There’s a humour he brings to Hoffa’s persona. Remarkably, computer technology has allowed all of them to be de-aged. If only it were that easy in real life! The big name cast also includes Harvey Keitel, Bobby Cannavale and Ray Romano.

The film casts an intricate web of Mafia tentacles and on screen is the “use by” date of each casualty – when and how they died. There’s no doubt that adds authenticity, as does the period detail.  Scorsese has crafted an epic film that has a more than a ring of truth about it. The 3½ hours passes relatively quickly.

It has a limited theatrical release before appearing on Netflix from 27th November, 2019.

1 thought on “The Irishman – movie and streaming review”