A spoof on mercenary Hollywood producers, The Comeback Trail delighted me. It features three of the biggest stars in the business. 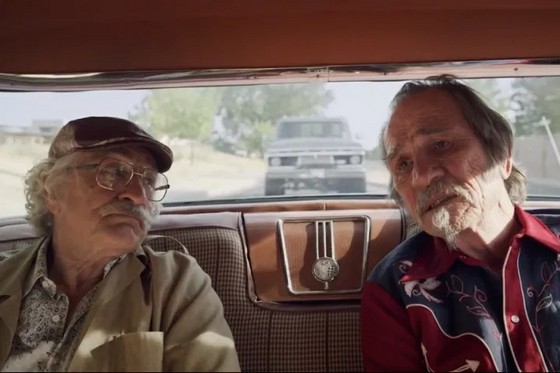 It’s Hollywood, 1974. Max Barber (Robert De Niro) is a producer whose lack of success in churning out D-grade dirges precedes him. Barber works in partnership with his nephew, Walter Creason (Zach Braff), although it’s clear who calls the shots. The pair’s latest film, Killer Nuns – a box office disaster – is the subject of a serious picket. Financing to the tune of $350,000 has come from gangster Reggie Fontaine (Morgan Freeman). Fontaine – adept at referencing classic Hollywood movies in his threats of violence – wants back the money he invested in the picture. But, of course, Barber doesn’t have it. Fontaine gives him 72 hours to stump up the cash – with a dire warning.

Barber visits a younger, more successful producer, James Moore (Emile Hirsch). Moore offers to pay big money for a dynamite script that Barber has been holding onto for years, but Barber rebuffs him. Eventually he succumbs, only to change his mind again when he chances into an insurance scam that could make his troubles disappear forever. Again soliciting Fontaine, Barber casts a fallen Hollywood star, Duke Montana (Tommy Lee Jones) in a movie based on a long-gestating script. Montana is way past his prime and looking to check out of this world. The idea is to literally kill off the lead and collect the insurance money.

Creason is excited by the prospect of a new shoot – especially this one. He’s always liked the script, even though Barber hasn’t. But Creason doesn’t know about Barber’s nefarious plan. Then everything goes pear-shaped.

Although silly and far-fetched, The Comeback Trail is also tremendous fun. The script by George Gallo (Bad Boys for Life) and Josh Posner – based on a 1982 film of the same name by Harry Hurwitz – is wonderfully contrived nonsense. Gallo’s direction allows the talent to shine.

The actors appear to be having a hell of a good time hamming it up. Although cornball antics abound, there are also belly laughs to be had. De Niro leads from the front, channelling the comic sensibility that endeared him to audiences in Meet the Parents (2000). Freeman puts on indignation as the tough talking hood with appropriate menacing sidekicks.

The Comeback Trail is simply good old-fashioned entertainment – lightweight fare made all the better because of the talent involved.  It’s the perfect tonic for these troubled times. Also, please wait for the credits to roll as you get the chance to see a tongue-in-cheek trailer for Killer Nuns.