Strong and colourful visuals and a family-friendly story feature in Disney Pixar’s latest animation. Coco is about a 12-year-old boy with big dreams. 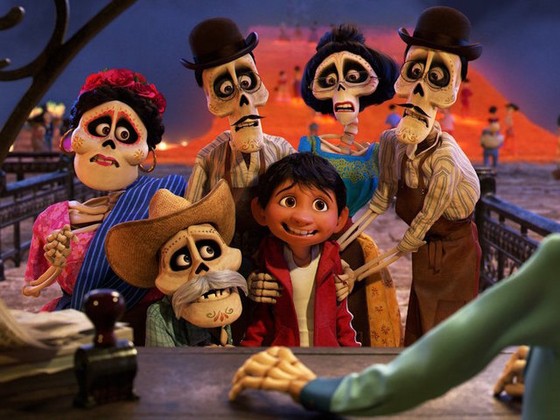 Miguel (the voice of Anthony Gonzalez) is an aspiring singer and self-taught guitarist. He dreams of following in the footsteps of his idol, Ernesto de la Cruz, the most famous musician in Mexico’s history. But Miguel’s family forbids music. Many years ago, his great-great-grandmother and great-great-grandfather came to an impasse. She wanted to raise their family together. But he couldn’t let go of his dream, leaving his family behind in his quest to be a musician. Passed down from generation to generation, great-great-grandma’s consequent ban on music is strictly enforced, much to Miguel’s dismay.

Miguel unearths a secret from his family’s past – a connection to Ernesto de la Cruz. He rushes to share the news with his family, thinking it will clear the way for him to be a musician. To his surprise, it only makes matters worse. Following a mysterious chain of events, Miguel finds himself in the stunning Land of the Dead. There he meets charming trickster Hector (Gael García Bernal). Together they set off on an extraordinary journey to unlock the real story behind Miguel’s family history.

The importance of family and cultural heritage, and pursuing one’s dream, are the forces at play here. Miguel’s drive is easy to warm to; while his single-minded grandmother Abuelita’s (Renée Victor) actions and hilarious dialogue are a treat. His great granny Mamá Coco (Ana Ofelia Murguía) is also a small but effective element in the film. An enthusiastic stray dog, Dante – who has trouble keeping his tongue in his mouth due to his missing teeth – is a constant source of fun and mischief, while a powerful flying tiger also makes its presence felt.

The story is split into two – one part taking place in the “live” world and the other in the spirit kingdom. The filmmakers have a lot of fun bringing the skeletons to life, especially that of a fast-talking relative.

Coco is one of the finest animations of the year, a cut above your usual family film.