Things no one will say about Charlie Kaufman’s new film, I’m Thinking of Ending Things: “Aww, that was sweet”; “What a cliched Hollywood ending”; “That movie made total sense”. Kaufman’s latest excursion into weirdness is almost Bergman-esque in its inscrutability. Indeed, it shares more than a little DNA with Bergman’s classic Persona (1966). But as ever, Kaufman imbues it with his own unique style.

Kaufman naturally supplies the screenplay, this time based on Iain Reid’s prize-winning novel of the same name. In the director’s chair, he displays a fine grasp of dialogue and acting techniques. The film becomes a kind of stage drama (literally, at one point) in which the clues are all in the language. Ultimately, not much “happens” in a traditional narrative sense. It features a lot of talking. So some will come away from it feeling frustrated or even bored, while others will find it fascinating. But I doubt anyone will be merely indifferent. 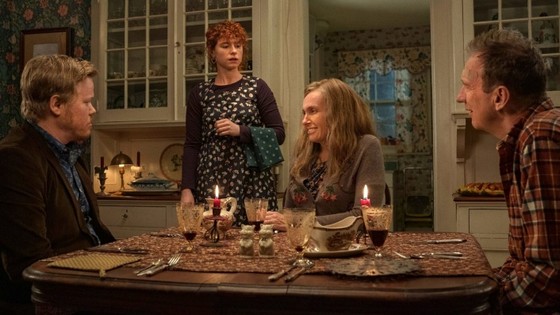 The plot, such as it is, sees Jake (Jesse Plemons) taking his girlfriend (Jessie Buckley) to meet his parents. When he picks her up, it’s starting to snow, and on the long drive to their farmhouse, the snowstorm gets heavier. When they arrive at the house however, Jake’s demeanour changes. His parents (Toni Collette and David Thewlis) are a little “off”. But before you can say American Gothic, things shift. Time seems to slip. And what’s in the basement?

These scenes are intercut with scenes of a high school janitor (Guy Boyd) going about his duties. On a break, he watches a schmaltzy movie. Kids rehearsing a production of Oklahoma! dance in the corridors. What does the janitor have to do with Jake – or anyone else for that matter? Without giving anything away, things do kind of come together at the end; but probably not in a way anyone would expect.

I’m Thinking of Ending Things takes enigmatic filmmaking to a new level. Jake is the only named character. Why? Is it some kind of clue? His girlfriend is referred to as Lucy, and Louise, and Lucia. At times she’s studying quantum physics, or gerontology, or she’s an artist, or a poet. At one point, the young woman recognises a waitress at a roadside diner, but can’t say how. Jake has a copy of a book by renowned film critic Pauline Kael in his “childhood bedroom”. Later, when the couple discuss John Cassavetes’ A Woman Under the Influence (1974), the young woman recites Kael’s review of it as if it were her own thoughts. The young woman carries a mobile phone, but no one else does. They seem to know what the device is, but they also seem to be of a different era.

And if you want to take another step into eccentricity, watch all the way through the end credits.

I’m Thinking of Ending Things continues Kaufman’s exploration of ageing. That really began in Anomalisa, but elements of it appear in films like Adaptation. He goes much deeper into the theme here though, with sometimes bizarre results (like a zany song-and-dance number).

Jesse Plemons (The Irishman) takes top billing, but his character is a bit of a cipher. Clearly a Kaufman-substitute, the character is more of a sounding board than a true protagonist. That said, Plemons’ performance is excellent. Toni Collette (Knives Out) and David Thewlis (Wonder Woman) ramp up the crazy as Jake’s parents; while Guy Boyd (The Report) gives an understated performance as the janitor. But Jessie Buckley (Judy) proves to be the glue that holds the film together. She gives the young woman a fierce intelligence tempered with a subtle vulnerability.

If I’m Thinking of Ending Things was released in cinemas, would comfortably sit in the art house circuit. Unlike many of  recent Netflix films, it certainly doesn’t pander to the lowest common denominator. It’s dense, difficult and elliptical – all the things Kaufman fans have come to expect. So if you’re in that category, you’ll find plenty to enjoy here.