Senior school student Becky (Lulu Wilson) is doing it tough. She was close to her mum who died of cancer and she refuses to engage with her father, Jeff (Joel McHale). Now Jeff drops a bombshell, telling Becky he’s getting married to Kayla (Amanda Brugel), who has a young son Ty (Isaiah Rockcliffe). He blindsides Becky with this news, just as the four of them arrive at their weekend getaway home, which Jeff had originally intended to sell after his wife’s death. 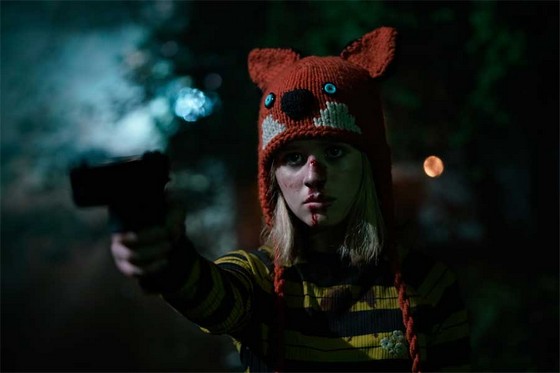 Meanwhile, a white supremacist, Dominick (Kevin James) has led a vicious prison break. He and his mate, Apex (Robert Maillet) – whom he calls his son – turn up at Becky’s house as she’s feuding with her father. She’s gone off to chill out with one of their two dogs, but that leaves the other three people – Jeff, Kayla and Ty – in the house. In the basement of the home Dominick hid a secret key; but when he searches for it, it’s not there. The one person who knows where it’s gone is Becky, but she’s not about to tell.

But she isn’t aware just how violent these men are. Dominick, in particular, will stop at nothing to get what he wants. Now it’s up to Becky to become a one-woman vigilante force and fight back.

The set up – juxtaposing school fighting with a prison attack – was fine. However, much of the time I simply didn’t believe what the actors were selling … and that’s obviously a problem. A big part of my concerns came down to the scripting by Nick Morris, Ruckus Skye and Lane Skye, which was like Swiss cheese. I struggled with the concept of a teen “braining” two big burly blokes.
I also felt Becky’s “attitude” was put on. Of the adults, only Kevin James was passably convincing with his menace.

Then “feasting” on the gore seemed strangely out of place. They appeared to be highly orchestrated scenes, as if the filmmakers were saying “we are bad dudes and look what happens to bad dudes!”. Let me be a bad dude too and give Becky the movie a bare pass.