We’ve all heard the adage “family first”, but this is ridiculous! Every time a person marries into this wealthy and secretive family … at midnight they have to play a game. That is a time-honoured tradition that can’t be broken. You see, this clan made its money off the back of board games. The new participant chooses a card from an old wooden box and if they are unfortunate enough to select the wrong card unbeknownst to them they will be targeted to die. In this case, the new bride does just that, finding herself playing a deadly game of Hide and Seek. 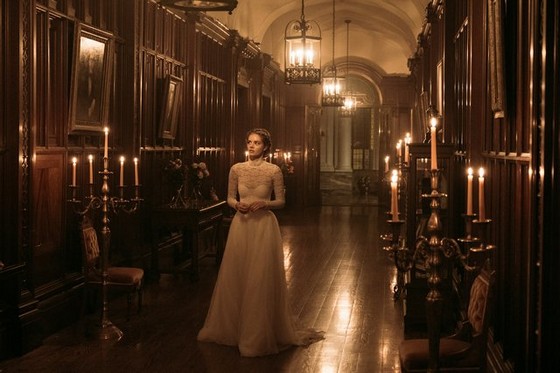 She is Grace (Samara Weaving) who has been brought up in foster homes. She has had an 18-month courtship with Alex Le Domas (Mark O’Brien) before tying the knot at his family’s stately home. They are joined by his mother and father, Tony (Henry Czerny) and Becky (Andie MacDowell), and his brother Daniel (Adam Brody). There’s also Alex’s weird aunt Helene (Nicky Guadagni) and several others besides. Alex has warned Grace about the eccentricities of his family, but there’s been no mention of an insidious game, until it is too late.

I should say that the “run for your life” scenario is set up nicely with an opening scene that occurs in the family home 30 years earlier. The movie’s premise comes from the scriptwriting team Guy Busick and R. Christopher Murphy, who have been friends and writing partners for decades. A trio collectively known as Radio Silence, comprising directors Matt Bettinelli-Olpin and Tyler Gillet, and executive producer Chad Villella, are known for their unique blending of comedy, adventure, and horror. They look out for distinctive original screenplays. Well … they have certainly found one here.

I found Ready or Not heaps of ghoulish fun. Of course, it gets more and more outrageous, but then that’s the point. There are genuine laughs and shocks to be had. What could be better than that? The script is a hoot.

Weaving is such a natural in the lead. She plays nonplussed, scared and determined with distinction and does so for most of the movie in her character’s wedding dress. Although I should add, it is a tad more worn, tattered and bloodied by the final act. The rest play along with various degrees of blood lust. This really is a family from hell.

I was entertained and engaged throughout. It is a comedic splatter fest with originality. Bravo to that.