As a filmmaking culture, Australia has a lot of people with great ideas. But small budgets and stingy government funding mean sometimes those ideas aren’t fully realised. And sadly, Promised is one of those. Writer-director Nick Condi’s somewhat unconventional family drama is apparently based on a true story, but its heart gets lost in a muddled plot. 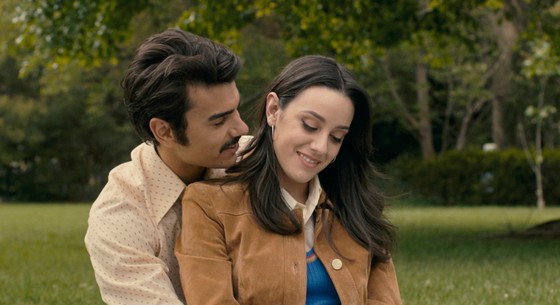 In a way, Promised flips the Romeo & Juliet tale on its head. Instead of true love being a bright but short-lived spark, this film tries to explore the notion of love as a gradual, tentative process. And while this is undoubtedly truer to real life, it’s pretty clear which version makes for better drama.

It’s Australia in 1953. In Melbourne’s close-knit Italian community, the tradition of “promising” – essentially an arranged marriage – lives on. Sal (Paul Mercurio) makes such a promise when he pledges his infant daughter to the son of community big-wig Joe (Mirko Grillini). But 21 years later in 1974, his daughter Angela (Antoinette Iesue) has zero interest in her promised mate, Robert (Daniel Berini), a struggling – but connected – lawyer. She’s in love with flaky student Tom (Santo Tripodi). And in an era of change and “women’s lib”, she doesn’t care about an arcane tradition. But it seems Tom hasn’t been entirely forthcoming about his extra-curricular activities, many of which involve gambling. As a result, he’s deeply in debt – and in trouble. At Angela’s insistence, Sal approaches Joe to see if something can be done. Joe proposes a compromise. Tom will have a free pass on his debts if he disappears – conveniently clearing the way for Angela to marry Robert as arranged all those years ago.

Condi’s starting point is interesting, but Promised meanders rather aimlessly. It picks up sub-plots but doesn’t resolve them; and introduces ideas without really exploring them. But towards the end, the film just piles up soap cliches in a very unsatisfying way.

Some rather bizarre acting choices don’t help. The performances – from some fine actors – are flat and stilted. I can only speculate this must have been a deliberate choice, though I can’t work out why Condi would want to go that direction. Also the script lumbers the actors with some pretty dire dialogue, limiting their scope. The bright spot is Antoinette Iesue as Angela, who at least injects some passion into the character.

Promised ends up derailed by its own good intentions. This is plainly a deeply personal project for Condi (as revealed in the closing credits), but his enthusiasm can’t make up for the clunkiness in his story.