Far-fetched but engaging, Kin is a tense “actioner” with a strong science fiction component. 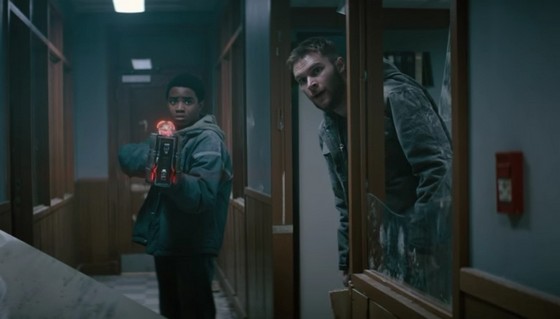 Fourteen-year-old Eli (Myles Truitt) lives in Detroit with his adoptive father Hal (Dennis Quaid), who keeps him on a tight leash. While exploring an abandoned building looking for scrap, Eli happens on the aftermath of an otherworldly shoot-out. In the debris, he finds an unusual-looking object – which looks all the world like a new age gun – and takes it home. He doesn’t know what power it has; but just holding it seems to activate it.

At the same time, Eli’s older brother Jimmy (Jack Reynor) has just come home from a stint in prison. He’s eager to reconnect with Eli and mend an estranged relationship with their father. Jimmy also has a most pressing need: to pay back local gangster Taylor (James Franco) $60,000. After Jimmy’s dangerous attempt to secure the money ends tragically, he hits the road with Eli – and Eli’s strange new weapon.

Chased by a criminal bent on revenge and two aliens pursuing their missing hardware, Jimmy and Eli are forced to go on the run. With the help of friendly stripper Milly (Zoë Kravitz), these lost brothers quickly come to realise the consequences of their actions. But for Eli, learning what the mysterious weapon can accomplish becomes more than just a case of protection – it might also reveal his destiny.

While I thought the three principal characters were far too nice for the back stories we were given, I have no doubt the filmmakers played it that way for empathy. And on that level it works. Eli has a strong moral foundation. Jimmy may have spent six years in prison, but shows that he cares about the lad. While Milly has a heart of gold and displays her sympathies to both.

Conversely, I felt Dennis Quaid painted the father as too gruff and intransigent. Still, I found the premise intriguing … and of course was cheering for the youngster throughout. James Franco seems to revel in playing the villain – and he plays “bad” well.

I defy you to pick the twist before it comes. I didn’t anticipate it. Of course, by then a lot of the absurdity in the plotting had played out. Still, I entered the cinema anticipating the worst, but exited thinking more of Kin than I had expected.