Midsommar is one of the most bizarre and perverse movies I’ve seen. The second feature film from writer and director Ari Aster (Hereditary), is a journey into the heart of darkness – a hallucinatory and disquieting fairy tale. 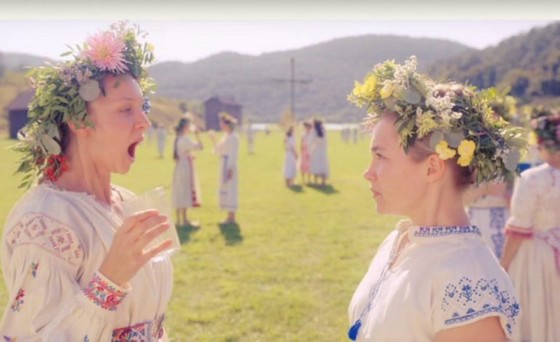 During a getaway with academic mates to a bucolic Swedish village, American couple Dani (Florence Pugh) and Christian (Jack Reynor) find themselves unexpectedly drawn into the world of a cult.

Their relationship is already in trouble before the trip begins. She is needy, but then suffers a devastating loss. Christian’s friends – Josh (William Jackson Harper), a PhD student interested in anthropology and folklore, Mark (Will Poulter), a caustic and chauvinistic goofball and Pelle (Vilhelm Blombren), a Swedish exchange student – encourage him to part ways with her.  But once tragedy happens, he won’t abandon her and takes up an offer from Pelle to visit his ancestral home in remote Scandinavia with the rest of the gang. Although not initially invited, Dani tags along. Once they arrive, things take a decidedly twisted turn at the village’s midsummer festival. Despite preaching togetherness and bonhomie, some of the rituals are deviant, to say the least.

In Midsommar, Aster examines an array of ideas – from personal fidelity to social influence and cultural legacy. He and his creative team constructed the Swedish village from the ground up. It has its own language, history, mythology and traditions.

Notwithstanding that, I thought Midsommar was painfully slow-moving mumbo-jumbo. The acting is decidedly ordinary, the script is inadequate and its execution far from impressive. Direction was lacking and I didn’t believe what I was being fed. It is a flight of fancy which makes little headway.

I seriously questioned some of the characters’ decision-making. The practices of the cult also don’t ring true. To me, Midsommar was simply extended white noise.