Just as it depicts Judy Garland’s life Judy, the movie, is a train wreck. In fact, I couldn’t wait for it to end. 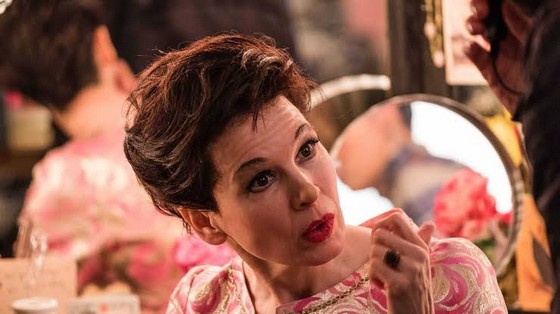 Garland wasn’t allowed to be a regular kid and was lauded over by the studio head Louis B. Mayer and her obnoxious, overbearing mother, Ethel. Given pill after pill at an early age, she was perpetually sleep deprived and developed a total dependency on medication. As an adult she drank like a fish, was destitute and unable to look after her children, even though she loved them. She went through a slew of husbands and felt insecure all her life. She became this prodigious but wasted talent. The movie is about her sad decline into the abyss.

The story arc primarily concerns the British tour she took in the last year of her life; but prophetically the movie starts with her as a child star in the Wizard of Oz in the company of the manipulative Mayer. While there are a number of flashbacks to that period, I wanted more. I found Judy hard work, slow going and repetitive. To me it lacked variation and substance and was unnecessarily strung out.

With her “lazy eyes” Renée Zellweger does a fine job inhabiting the character and exposing her flaws. She nails the persona and is undoubtedly the best thing about the film. I thought Richard Cordery as studio head Mayer  – beast that his role called upon him to be – was another standout. So, my criticism isn’t about performance rather content that wasn’t well packaged.

The direction by Rupert Goold wasn’t tight enough. And the script by Tom Edge lacks those “compulsion to keep watching” elements. The movie suffers from a series of flat patches. I should add that the screenplay is based on a play End of the Rainbow by Peter Quilter.

I was left bitterly disappointed in the film because I expected so much more.