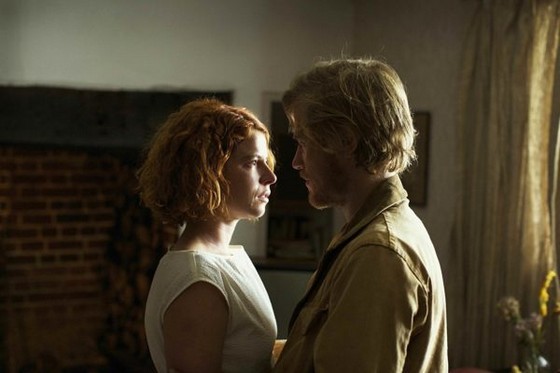 Moll Huntford (Jessie Buckley) was home-schooled by her domineering mother, Hilary (Geraldine James) after an incident at school more than a decade earlier. Now a tour guide on the Channel Island of Jersey, she can’t stand the constraints placed on her at home, where she’s expected to tend to her dementia-ridden father. Her decision to walk away from her own birthday party will have widespread ramifications.

She takes up with another loner, Pascal Renouf (Johnny Flynn). He’s a bad boy, who’s had more than his share of run-ins with the law. Together they do things their way, much to the consternation of her family. Meanwhile, a series of grisly murders across Jersey has the residents understandably spooked. And Pascal becomes a prime suspect.

Is he guilty or not? Has being with him freed Moll’s inner demon? They’re just some of the questions probed in the unfolding drama.

Pearce grew up in Jersey. The infamous Beast of Jersey – a child molester who had evaded capture for 10 years in the 1960s – still haunts the island. Pearce became interested in stories which shed light on the darkness hiding beneath the surface of a seemingly perfect community.

Beast features strong performances from the three leads, ably led by Jessie Buckley. The tale is strictly told from Moll’s perspective. You can see Buckley looking inside her character to try to understand herself and where she fits in. From the outset, Geraldine James puts up the “don’t argue” sign as Moll’s unnerving mother. She, too, is convincing. For his part, Johnny Flynn plays Pascal as an enigma of sorts.

A violent and unsettling undercurrent infects Renouf … and Moll. Cinematographer Benjamin Kracun ably captures the harshness and beauty of the island.  Beast won’t suit all tastes, but certainly has an edge to it.