From the outer reaches of space to the backwoods of Georgia, the hunt goes on in Shane Black’s reboot of the Predator series. Black, who directed Lethal Weapon and wrote Kiss Kiss Bang Bang, played the role of Hawkins in 1987’s original Predator. Here, he directs from a script he penned with Fred Dekker (RoboCop 3). 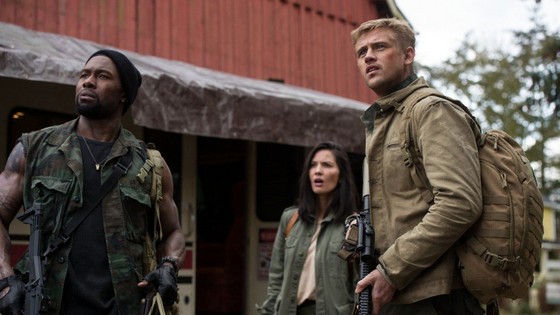 The universe’s most lethal hunters are stronger, smarter and deadlier than ever. Only a ragtag crew of ex-soldiers and a biology professor can prevent the end of the human race.  The blokes in the crew are affectionately known as “Loonies.” Led by Quinn McKenna (Boyd Holbrook), they’re a group of veterans suffering from PTSD who know each other from group therapy. Its members are Williams (Trevante Rhodes), Coyle (Keegan-Michael Key), Baxley (Thomas Jane), Lynch (Alfie Allen) and Nettles (Augusto Aguilera).  They long for the connection and brotherhood they once had.

Estranged from his wife Emily (Yvonne Strahovski) and son Rory (Jacob Tremblay), McKenna is on a job in Mexico when a Predator spaceship crash lands. He gets exposed to a cover-up and ends up trying to get armour that he’s found back to his address in the United States. He needs proof of the alien invasion because no one is going to believe him. Unfortunately, his son Rory – who is on the autism spectrum – discovers it and puts one and one together, which starts an avalanche of problems.

Working with McKenna is Dr Casey Brackett (Olivia Munn), a scientist who researches how creatures adapt. She’s one of the top people to go to if other intelligent life forms are encountered. So this is something she’s been waiting for her entire life.

I can’t say there was anything I particularly liked about this fourth instalment of the Predator series (the sixth if you count the two Alien vs Predator films). It got sillier and sillier as it progressed. It was expectedly violent and not very imaginative.

I couldn’t understand why McKenna wasn’t killed along with just about everyone else. After all, Predators are particularly good at destroying any opposition – except when it came to him. Sure, I understand that if everyone died quickly, it would’ve made for a very short film; but I didn’t need or want Teflon-coated heroes.

The filmmakers introduced a little humour into the franchise, so they went with it. Pretty standard stuff as far as I’m concerned. Again, nothing much to see here. In short then, the whole film was largely disappointing. Even so, it sets up yet another sequel. But The Predator has well and truly worn out its welcome.