Like the recent Beautiful Boy, Ben is Back is a drama about a family trying to cope with their teenage son’s drug addiction and the emotional toll it takes. With its story of a drug addicted teenager returning home for a visit with his family, Ben is Back makes a fine companion piece to that film. But as a double feature, the two would make for a rather grim night at the movies.

It is Christmas Eve, and the Burns family return home from an early morning church rehearsal to find 19-year old son Ben (Lucas Hedges) waiting. Ben has been addicted to drugs since getting hooked on medically prescribed opioids five years earlier. Having been clean for 77 days, he is supposed to be in rehab, but says that his sponsor suggested it would be good to spend some time at home with the family. 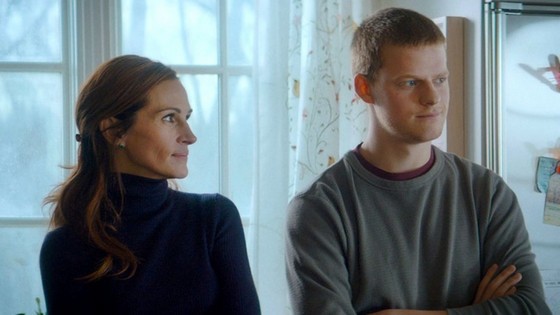 Mother Holly (Julia Roberts) is delighted to see him but is still wary of him. She has invested a lot of her emotional energy into supporting him and helping him try to overcome his addiction. Stepfather Neal (Courtney B Vance) doesn’t trust him, especially due to the trouble he caused during his last visit home, and barely controls his anger at Ben’s visit. Sister Ivy (Kathryn Newton) is also suspicious of him and used to him disappointing her. Holly however is determined to keep a close eye on him and ensure that the Christmas celebrations go smoothly. But the tension in the air is palpable and the family seem to be walking on eggshells in Ben’s presence.

Things seem to be going smoothly until the family return home from an evening church service to discover that the family home has been broken into and the beloved family pet stolen. Ben immediately suspects one of his former drug dealing colleagues and sets out to find the person responsible, accompanied by an increasingly desperate and frantic and emotionally overwrought Holly as he ventures into places that remind him of his dark and painful past as an addict desperate to do anything for the next fix. A local drug kingpin has kidnapped the dog as a way of trying to force Ben into dealing for him again.

The film takes place over the course of twenty four hours, but the second half of Ben is Back becomes more melodramatic and veers away from compelling family drama into more generic thriller territory. The cold wintry locations perfectly add to the increasingly chilly nature of the drama. Cinematographer Stuart Dryburgh (The Great Wall) captures a superb contrast between the warm and welcoming environment of Ben’s home and the gritty, seedy nature of the mean streets he prowls through in search of the missing pet. As night sets in so too does the film turn darker in tone.

Ben is Back has been written and directed by Peter Hedges (Dan in Real Life), the father of star Lucas, and loosely draws on his own formative experience of living with an alcoholic mother trying to kick her addiction. There is an honesty and rawness to the material. The film explores the emotional cost of addiction on not only the addicts and the family that love and support them, but also the wider community as well.

Ben is Back hinges on the powerful and insightful performances of its two leads who have never been better. This is one of Roberts’ (Wonder) best performances; she delivers an emotionally revealing and showy performance that captures Holly’s strengths and determination, but also her fears and vulnerabilities. Hedges is one of the most promising young actors around and seems to have a lock on playing troubled teens (watch out Timothee Chalamet!) His impressive resume includes the orphaned teen in the Oscar winning Manchester by the Sea, a closeted teen in Lady Bird (which also featured Chalamet), and a gay teen undergoing conversion therapy in Joel Edgerton’s Boy Erased. Here he matches Roberts perfectly, and delivers arguably the performance of his career to date. He brings a certain charm to his performance, but it is also tinged with an air of unpredictability. The exchanges between him and Roberts seem natural and realistic, and the pair develop a strong and convincing dynamic that propels the drama towards its grim finale.

Ben is Back is another movie dealing with addiction, and while it’s engaging and well acted, a few plot missteps undermine the good work of Roberts and Hedges.