Based on the 2013 bestseller of the same name, Wonder tells the inspiring and heartwarming story of 10-year-old August Pullman.

Born with facial deformities, Auggie (Jacob Tremblay) becomes the most unlikely of heroes when he enters the fifth grade at his local school. His medical issues had prevented him from going to a mainstream school before then. Both he and his parents, Isabel (Julia Roberts) and Nate (Owen Wilson), and sister Via (Izabela Vidovic) worry about the move because he looks so different to others. 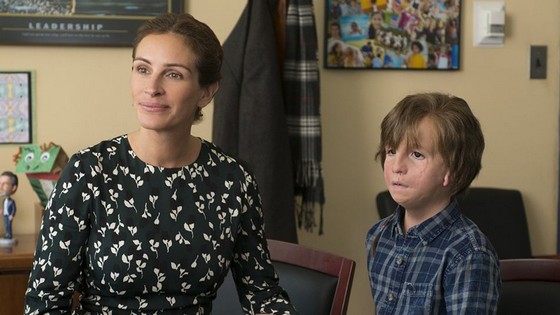 A science nerd, Auggie dreams of going into space and constantly wears his NASA space helmet. But obviously that will have to be jettisoned when he attends school. He faces heartache because – as we know – children can be cruel. But with the support of family, teachers and the school principal, Auggie shows just how special he is. All he ever wanted was to be an ordinary kid – but as his sister keeps telling him, you can’t be ordinary when you were born to stand out.

Author R.J. Palacio openly admits that she was the one who, in 2008, found herself running from, rather than engaging with, a child at an ice cream parlour who looked different. A graphic designer by day and hopeful writer by night, Palacio was out with her children when she did something she deeply regretted. They found themselves sitting next to a child that had a severe craniofacial difference, someone who looked very much the way she described Auggie in her book.

But it didn’t end there. Feeling shame, Palacio wanted to face up to her response, to turn the tables on it by looking at it from the most important point of view: the child who unwittingly sparked it. She started thinking about what it must be like to live everyday facing a world that doesn’t know how to face you back and she began writing her book that night. That’s when Auggie Pullman sprang into being, along with an entire cast of characters who took Palacio by surprise.

This is a movie that made me cry; but at times felt deeply manufactured, designed to milk the most out of situations. One moment you’re lost in the plot; the next, though, you can see screenwriter and director Stephen Chbosky (The Perks of Being a Wallflower) pulling the strings. You can feel the manipulation.

Wonder is certainly pure of spirit and caring throughout. It sends all the right messages, especially for children.

Young Jacob Tremblay, who should have received an Oscar nomination for Room, gives another stellar performance as Auggie. His parents and sister, too, are all depicted as very nice people. Julia Roberts almost effortlessly makes Isabel credible. Owen Wilson puts his comic sensibilities to good use. Izabela Vidovic has an air of mystery and shyness about her characterisation as Via. Mandy Patinkin shines as the principal that provides wise counsel.

One of the best things about Wonder is the fact that the film looks at the circumstances surrounding Auggie from different perspectives. It then continues to develop each of these threads into a unified package. So, in spite of my already expressed qualms, it’s a crowd-pleaser. Suffice to say, though, that 32 years ago Mask tackled similar subject matter with less pretence.