I’m a big fan of Greta Gerwig. Along with the likes of Brit Marling and Natalie Portman, she’s part of the vanguard of women filmmakers who can literally do it all. As well as 40 acting credits, she has 10 writing credits under her belt. Now she makes her solo directorial debut with Lady Bird.

This love letter of sorts to Gerwig’s hometown of Sacramento, California is a film of quiet beauty. Amid the bombast and seriousness of (some of) this awards-season’s offerings (think Dunkirk, for example) this is a grace note of subtlety. 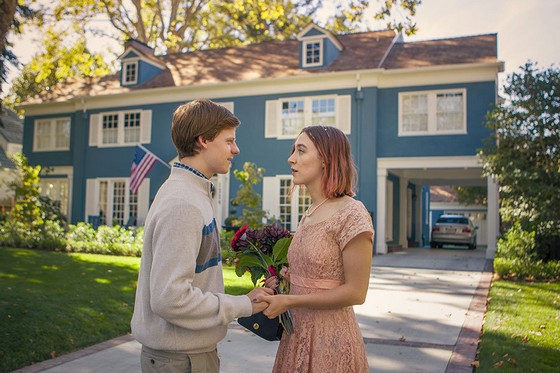 The film takes place over a year (specifically, the year 2002) in the life of high school senior Christine “Lady Bird” McPherson (Saoirse Ronan). Lady Bird is contemplating which college to go to after graduating. She dreams of going to a prestigious Ivy League school. Her mother Marion (Laurie Metcalf) however has somewhat humbler goals for her daughter. She counsels Lady Bird to look at a local university – or even community college. Her father Larry (Tracy Letts) wants to help Lady Bird get to the school of her dreams; but when he loses his job, that looks increasingly unlikely.

Before all that though, Lady Bird has to negotiate her senior year at a Catholic school. There she has one long-time friend, in the form of Julie Steffans (Beanie Feldstein). When Lady Bird and Julie try out for the school production of Merrily We Roll Along, Lady Bird sees another side to fellow senior Danny O’Neill (Lucas Hedges). Soon she develops a crush on Danny; but is unsure if he’ll reciprocate.

Lady Bird is, at its heart, a meditation on the relationship between mothers and daughters. Over the course of the film’s economical running time, Marion and Lady Bird clash repeatedly. But Gerwig frames these clashes in their mutual affection for each other. Lady Bird is quick to gripe about her mother’s behaviour; but when another student makes a disparaging remark about Marion, she’s equally quick to leap to her defence.

It’s not one-sided either. We’re given insights into Marion’s frustrations with her daughter, and her hopes for her future. Even Lady Bird’s romances – with the somewhat dorky Danny, and cool-kid Kyle (played by Timothée Chalamet) – are seen through the prism of the mother-daughter dynamic. Gerwig also touches on the relationship between father and daughter, though it’s not explored quite so poignantly – or pointedly.

Gerwig’s chops as a screenwriter are on display here. The clever (sometimes biting) dialogue is excellent, but leavened by humour and warmth. She also shows she can put a compelling narrative together. Without giving anything away, that narrative comes together in a thrilling final sequence that showcases Gerwig’s talent brilliantly.

As the women at the centre of the film, Saorise Ronan and Laurie Metcalf have to do most of the “heavy lifting” and both turn in performances worthy of awards. Ronan (Brooklyn) at age 23 slips into the “skin” of 17 year-old Lady Bird effortlessly. She imbues the character with exactly the right blend of naivete, single-mindedness and empathy. Metcalf (The Big Bang Theory) softens Marion’s hard edges with a knowing understanding of her role as a mother. Tracy Letts (The Lovers) gives solid support as Larry. Promising young actor Lucas Hedges (Three Billboards Outside Ebbing, Missouri) has some nice moments as Danny, but the equally promising Timothée Chalamet (Call Me by Your Name) has little to do as Kyle.

I thoroughly recommend Lady Bird. You don’t have to be a teenage girl to appreciate the story or the characters. This is a film grounded in reality with a palpable understanding of how families work. And one more thing – if you’re going to see this film and you’re able to do it, take your Mum with you.