Call Me By Your Name is a sensitive coming-of-age story. Set in Crema, a sun-drenched rural part of Italy, it deals with themes of desire, repressed sexuality and identity.  James Ivory, best known for his work with the late Ishmail Merchant provides the script. He’s adapted Andre Aciman’s 2007 novel of the same name. 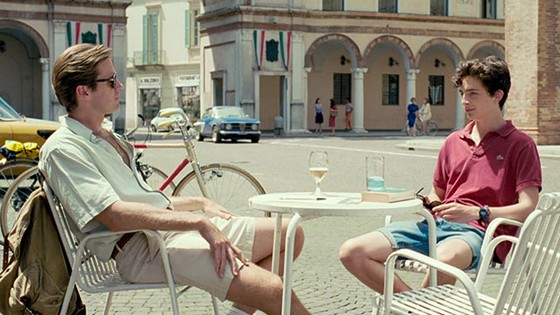 Elio Perlman (Timothee Chalamet) is the bright and curious 17-year old son of respected archaeologist (Michael Stuhlbarg). His days are spent reading, swimming and transcribing music, but it’s a fairly dull existence. Every summer an intern comes to stay with the family and work with his father. This year it’s Oliver (Armie Hammer), a handsome and charming American. Elio finds himself drawn towards Oliver. It takes some time before the two realise they feel the same and begin to act on their desires. Over the course of the summer their relationship becomes more intense and intimate.

This is the new feature from Italian director Luca Guadagnino. His follow-up to A Bigger Splash is his most mature, tender and restrained work to date. As with his previous film, a lot of the action here takes place near water – swimming pools, the ocean, or lakes – which acts as a metaphor for the fluidity of life.

Call Me By Your Name is an intimate drama, beautifully filmed and acted. Gaudagnino’s sensitive direction deftly avoids any hint of melodrama. There’s a palpable chemistry at work between Chalamet and Hammer that breathes life into the relationship.

This is a breakthrough role for the talented Chalamet (who played Matthew McCounaughey’s son in Interstellar.) He’s a revelation as Elio, bringing intelligence and a sense of longing to his performance. He captures the pain, confusion and insecurity of adolescence and first love. Hammer is largely cast against type here, but he brings charm and warmth to his performance. Stuhlbarg is also good in a subtle and nuanced performance. He has a fine moment with his final heartfelt speech to Elio in which he offers wisdom and acceptance. The cast also includes Esther Garrel, who is the daughter of legendary French director Philippe Garrel.

Thai cinematographer Sayombhu Mukdeeprom provides the sumptuous and seductive visuals. He bathes the material in a warm palette. And the gorgeous locations are enough to have you planning a trip to Italy.