This clever, thoroughly entertaining French comedy is the latest from co-writer and director Carine Tardieu (The Dandelions). The breakout hit of the 2017 Cannes International Film Festival, Just to be Sure premiered in the Directors’ Fortnight and received multiple standing ovations. The charming rom-com is a tale of parenthood, love and family – both lost and found. 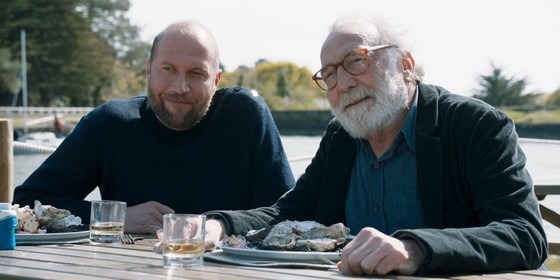 Erwan (François Damiens) is a lonely 45-year-old widower and bomb disposal expert. When he accidentally discovers the man who raised him isn’t his real father, he starts a search for his biological dad. Thanks to a local private detective he soon locates the mischievous, 70-something Joseph (Andre Wilms). Seems his mother may have known Joseph briefly. Erwan relates to Joseph … and falls for a no-nonsense doctor, Anna (Cécile de France). Erwan and Anna have a fiery road encounter. She also has ties to Joseph. Conflicting loyalties are compounded when Erwan’s 23-year-old daughter, Juliette (Alice de Lencquesaing) finds she’s pregnant. She defiantly refuses to name the father of her baby.

Tardieu (and fellow writers Michel Leclerc and Raphaelle Moussafir) added a mythical ingredient to the drama that made sense in the context of the film. The subject matter could have been handled very differently. In fact, it could lend itself to high drama. Instead, a beautiful light touch permeates the film. Its pacing is spot on, ensuring the story moves along.

It’s hard not to be won over by the warmth, which it exudes. You quickly care about the characters and their fate.

Damiens (The Bélier Family) is perfectly cast as a bear of a man with a soft heart. He dominates proceedings. Once de France appears – which is well into the picture – she matches Damiens for heft.

Tender and effective, Just To Be Sure is an adult crowd-pleaser.