A ponderous ode to sad sacks the world over, The Lovers really doesn’t start to resonate at all until nearly four-fifths of it is done and dusted. By that stage you are utterly convinced that watching grass grow is a whole lot more interesting. 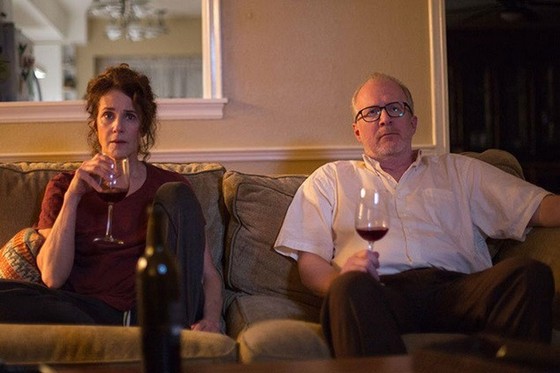 The Lovers concerns a middle-aged husband and wife, each embroiled in an extramarital affair. Michael (Tracy Letts) and Mary (Debra Winger) are long past passion, never mind patience, after decades of turmoil and tedium in their marriage. Each is now distracted by a lover on the side and both intend to call it quits on the other after one last family get-together with their collegiate son (Tyler Ross). Michael has his hands full with a fiery ballet teacher (Melora Walters), while Mary is passionate with a novelist (Aidan Gillen). Both are used to “late nights at the office” to explain their absences from home long after dark. Of course, neither of their other halves complain. Suddenly, though, the dried-up spark between Michael and Mary is reignited.

The Lovers has the look and feel of a play that has been very badly transposed onto the big screen. Writer/director Azazel Jacobs (Momma’s Man) needed a rocket under his bottom to get things moving … for what he dished up was simply dreary. Jacobs, who is in his 40s, said he sees a lot of people around him splitting up and the film is his way of protesting that “by looking at a love that finds a way to go on, even when it appears to have evaporated. “Michael and Mary have become completely comfortable with having outside lovers, to the point that feeling love for one another becomes an act of subversion.”

None of the four key characters holds any appeal and you can’t help thinking they deserve each other, but the audience should be spared their discomforts. I can only presume Jacobs’ instruction to them consisted of the words: “let the blood drain from your faces and ensure you show no emotion whatsoever”. There are only so many languid shots of angst that we can take before we feel like running out of the cinema in utter despair at the tripe we are being fed.

Talking of food, it is in the meat section of a local supermarket that finally the life saving paddles are applied to a patient that has gone into cardiac arrest (I am, of course, referring to the film). That is when the wife’s lover whispers some fateful words to her husband … and suddenly we have a pulse. From that point on the action escalates and my interest was peaked.

Given what has gone before it though, I certainly don’t buy the so-called happy resolution, but at least it is rather interesting and unexpected, which is more than I can say for the vast majority of the film. You need the patience of Job just to sit through it all.