Miranda July is a force of nature. The multi-talented writer (for both page and screen), artist, musician and actor can seemingly turn her hand to anything. But with everything on her plate, her film output has been a little sporadic. But she’s come roaring back with Kajillionaire, a film that will almost certainly please her fans.

July’s debut feature, You and Me and Everyone We Know (2005), met critical acclaim. Between that film and Kajillionaire, she made just one as director, The Future (2011). So a new Miranda July film is something rare and in this case, quite beautiful. July envelops the film in her trademark quirkiness. If you’ve seen her other films, you’ll know what to expect. And while her particular level of strangeness might be a bit much for some, admirers of indie directors like Noah Baumbach, Lynn Shelton and Yorgas Lanthimos will find a lot to like here. 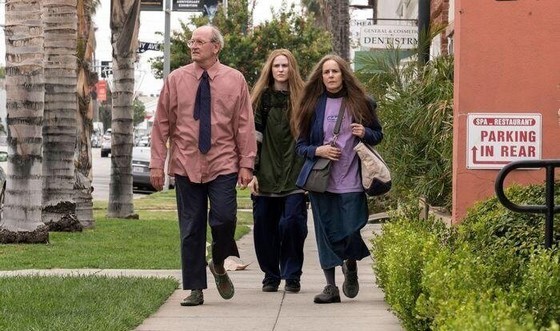 The Dyne family are grifters. Father Robert (Richard Jenkins) and mother Teresa (Debra Winger) have inculcated their daughter Old Dolio (Evan Rachel Wood) into their hard-scrabble lifestyle. The family live hand-to-mouth, only ever thinking about how to make their next score. From stealing mail packages to forging cheques, they’re strictly a nickel-and-dime outfit. They live in what looks like an accountant’s office, apparently abandoned because pink goo periodically oozes from the ceiling. But they’re behind on even the minimal rent the landlord Stovik (Mark Ivanir) charges. When they finally make a decent score, Old Dolio (whose bizarre name is explained in the film) hits on a plan to get the back rent. It involves a round-trip flight from LA to New York, missing luggage and travel insurance.

Everything goes mostly according to plan. Old Dolio claims her luggage is missing (Robert and Teresa have actually taken it) and the airline duly reports it lost. But rather than handing over money on the spot, they’ll have to wait up to 6 weeks for a cheque. Meanwhile, on the flight back to LA, Robert and Teresa have made the acquaintance of the charming Melanie (Gina Rodriguez). She manages to wheedle her way into their schemes, begging to take part in their next scam while they sweat on the cheque from the airline. The shy, awkward Old Dolio however is unhappy that this brash interloper is upsetting the long-established family dynamic.

On the face of it, Kajillionaire outlines the anatomy of a scam – though the players and the victims aren’t revealed until the very end. But like all the best movies, that’s not really what it’s “about”. Rather, July’s quietly brilliant script explores the nature of family, of love and of trust. For a while I was a little worried the film might be going down the path of “poverty porn” (a la The Florida Project, which I disliked intensely). But July quickly sets it on a very different course. Then she completely wows with one of the most stunning sequences I’ve seen this year. And she finishes the film off with visceral emotional punches.

Kajillionaire works on a lot of levels. It’s a love story, an observational critique of inequality in American society, and a “heist” movie all at the same time. July sews a lot of humour into its fabric, though most of it is wry rather than uproarious. Although he most eschews the traditional sun-drenched views of Los Angeles, DOP Sebastian Winterø produces some stunning images. And composer Emile Mosseri (Homecoming) underlines everything with a fantastic score.

Evan Rachel Wood has been hanging out in Westworld (the TV series) and plays very much against type as the mousy Old Dolio. Gina Rodriguez too is probably best known from television (Jane the Virgin) and gives Melanie a breezy charm, in complete contrast to Wood’s character. July’s script requires both actors to find layers in their characters, and they deliver. The fabulous pairing of Debra Winger (The Lovers) and Richard Jenkins (The Shape of Water) are excruciatingly brilliant as the awful ringleaders.

Kajillionaire is, in many respects, an amazing film. Yes, you need to tap into July’s off-kilter sensibility. Yes, you need to pay attention to what’s going on. And yes, you need to leave any pre-judgment at the door. But if you can manage those things, a fabulous cinema experience awaits.