From his first feature, Cronos, del Toro has been fascinated by monsters of one kind or another. They’ve featured in basically all his films. The Shape of Water is no exception. The difference here is that the monster isn’t an object of fear, but a catalyst for one of the most unlikely romances ever seen on the screen. Of course, none of it is meant to be taken literally. The film itself is an allegory, stuffed with metaphors and film references. 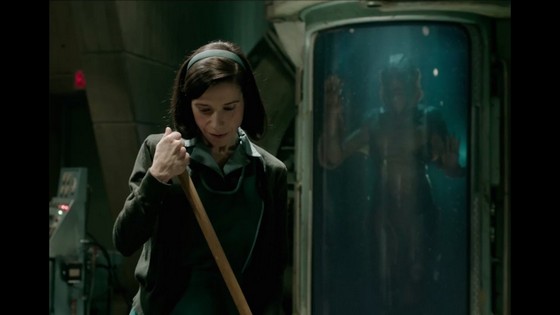 As the film begins (with a brilliant opening sequence) we meet Eliza Esposito (Sally Hawkins). It’s the early 1960s, and Eliza lives a lonely existence in a Baltimore apartment above a cinema. She’s mute, but not deaf. So she speaks via sign language, but can hear what’s going on around her.  Her only real friend is her equally lonely neighbour Giles (Richard Jenkins).

Eliza’s life is one of routine. She essentially sleeps all day so she can work the “graveyard shift” at a government research facility each night. Col. Richard Strickland (Michael Shannon) oversees the facility with a firm hand (or maybe, an iron fist). At work, Eliza has a bond with chatty colleague Zelda (Octavia Spencer); but her lot there is as humdrum as it is at home. That is, until a team including scientist Dr Bob Hoffstetler (Michael Stuhlbarg) arrive with something referred to only as “the asset”. This “asset” turns out to be a humanoid amphibian (Doug Jones), which the government hopes will give it an edge in the Space Race against the Soviets.

The Shape of Water is many things. First off, it represents del Toro’s homage to the cinema of the 1950s. An obvious reference is to The Creature from the Black Lagoon, which has plainly influenced the design of the amphibian. But they go well beyond that. Del Toro taps into the sci-fi films of the era, like The Day the Earth Stood Still – themselves allegories of well-founded Cold War fears. That Cold War dynamic is strongly referenced here, though in a far more nuanced way than it would have been in the 1950s.

There are plenty of film noir references too, especially in the climactic scenes toward the end of the film. Del Toro even fits in an out-there tribute to Fred Astaire. You can also pick out dozens of movie and TV show references from the time. Oh, and it wouldn’t be a del Toro film without some religious overtones, though these are relatively restrained.

The love story at the centre of the film is sensitively handled. Of course, since the whole thing is a fable (a fairy tale, if you like), this is aspect of it is plainly meant to be taken in that spirit. Don’t get too hung up then on the concept of a romance between a woman and a “fish-man”. After all,  no one seems to have a problem with a romance between Belle and The Beast. Still, the film has some interesting things to say about women’s place in the world and control over their own destinies.

If there’s anything about The Shape of Water that could have been improved, it’s the character of Strickland. He’s basically a cartoon bad-guy. The only thing missing is a moustache for him to twirl. Sure, this kind of movie needs an identifiable villain, and had it been made in the ’50s, the character might have been appropriate. But it strikes an odd note in a film otherwise notable for its subtlety. Compare how the film treats Strickland with how it treats Dr Hoffstetler. Del Toro and co-writer Vanessa Taylor give Hoffstetler a lot more complexity.

Still, Michael Shannon (Nocturnal Animals) milks the role for all its worth, creating a memorable villain. Michael Stuhlbarg (Call Me by Your Name) is also excellent as Hoffstetler. Octavia Spencer (Hidden Figures) is arguably under-utilised as Eliza’s co-worker, though she does get some decent one-liners. But two key performances anchor the movie.

Sally Hawkins (Maudie) is brilliant as Eliza. Without a voice (almost – no spoilers) to use, she has to rely on her face and physique. It’s a wonderful performance, full of emotion and bravery. Richard Jenkins (Kong: Skull Island) just about matches Hawkins’ performance, albeit in the thankless role of the supportive side-kick.

Brilliantly conceived, beautifully detailed and exquisitely rendered, The Shape of Water is essential viewing for any del Toro fan; or indeed anyone who loves the movies. If you’re neither of those, you might struggle with the film’s tone and concepts. And by the way, the film is rated MA for some very good reasons. But if you enjoy being challenged, this could be the film for you. Who knows, you might even come to love it.