“A broken bird and a scarecrow. An artist and a fish-peddler. A mismatched pair. Two souls existing on the fringes of society who find one another and change each other in the course of their lives together.” So says director Aisling Walsh (The Daisy Chain) about the two outsiders who form the nucleus of Maudie. 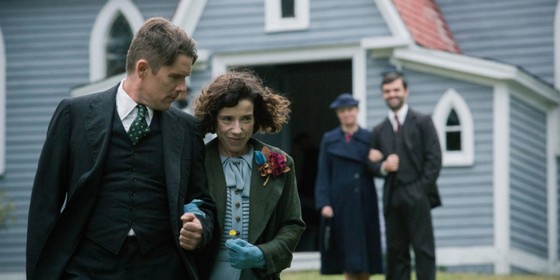 Everett Lewis (Ethan Hawke) is a man who owes nothing to anyone. Abandoned by his parents at a young age, he has nevertheless managed to become self-sufficient, largely by collecting scraps and selling fish. He lives in small house that has neither running water nor electricity. Everett is his own boss and has everything he needs, except maybe someone to clean the house and cook his meals.

When Everett posts an ad for a live-in housekeeper, the only person who shows interest is a strange looking woman. Her name is Maud Dowley (Sally Hawkins) and she likes to paint. The relationship that develops between them is testy but critically important to both. Everett us distrustful of others, and readily angered. At first he treats his housekeeper dreadfully, but comes to rely upon her more and more.

This little story, written by Sherry White, is based on fact. The resulting film is slow but a crowd-pleaser.

Hawkins (Blue Jasmine) is a superb character actor. Time and again she’s shown her superior acting chops; and so it is here. Her character refuses to let her downtrodden position in life wear her down. She is determined, displaying strength and a kind of nobility. Hawkins readily straddles the nuances required of her persona. Hers is a mighty visual performance, not the least bit mawkish. Hawke (Valerian) too is memorable as the hard-working and mentally challenged outcast.

Before this one was over I had tears streaming down my face. At the end of the film, we see a snippet of the real life couple on whom the film is based. While perhaps a tad indulgent, Maudie nevertheless hits so many of the right notes. Rated PG, it scores a 7½ out of 10.