A relentless, super intelligent mind puzzle, which gets better and better as the stakes grow, this is one of the year’s best offerings. Based upon Herman Koch’s 2009 international bestselling novel – which has been published in more than 50 countries – The Dinner is a dark, suspenseful drama about the lengths people will go to protect their families and themselves. 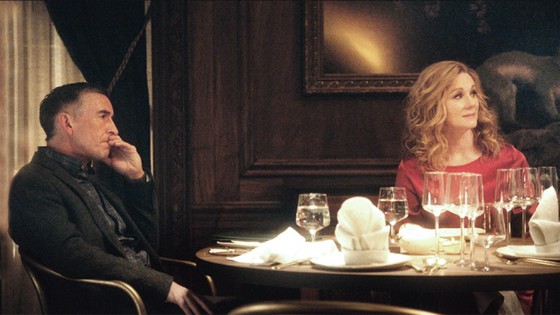 Stan Lohman (Richard Gere) invites his younger brother Paul (Steve Coogan) and his wife Claire (Laura Linney) to join him and his wife Katelyn (Rebecca Hall) for dinner at one of the town’s most fashionable restaurants. The stage is set for a night of incredible food, awkward conversation and uncomfortable truths. Paul has seethed with resentment at Stan since childhood, believing that Stan always got more than his fair share of attention from their parents. The fact that Paul is now a history teacher receiving disability benefits after a debilitating nervous breakdown and Stan has become a congressman campaigning to be governor only deepens his antipathy for his big brother.

While the artfully prepared courses of the meal are brought out by the restaurant’s staff, the atmosphere at the table is anything but civilised. Paul seems determined to attack and alienate everyone and there is palpable tension between the politician and his wife. Eventually it becomes clear why Stan has brought everybody together.

A riveting story filled with many shocking twists and turns, The Dinner is a chilling parable about the savage reality hidden beneath the surface of middle class lives. While the cuisine is grandly presented in course order – Aperitif, Appetiser, Main Course, Cheese Course, Dessert Course, and Digestif – the food is a metaphor for chapters of the unfolding story. “The food is ridiculous and that’s the point,” says screenwriter and director Oren Moverman. “These people’s worlds are falling apart, but they’re being presented with the likes of Pumpernickel Soil.”

The film does not confine itself to the walls of the restaurant or to the evening of the dinner. It is constantly moving in place and shifting in time, gradually introducing Paul’s painful memories and navigating the emotional history of the four people at the table. This is the sort of movie that you need to let work away on you and not judge it too early.

The pieces of the jigsaw take a while to connect and create the full picture, dastardly that it is. The stakes are massive. The attention switches throughout to respective members of two generations of the one family. None will be silenced. Mental illness comes into sharp focus, as does the issue of parenting. Much credit lies at the feet of Moverman, who enables the tension to grow to the combustible, driven primarily by words.

The performances are superb. The actors make the material sing. The juxtaposition of the setting where the four will have it out and the action that precipitates it – as incongruous as it may seem – works superbly. You can feel the strings being pulled and yet you want them to be as the truth is finally laid bare.