For a while there, they were the most popular double act in the world. Laurel & Hardy were superstars of slapstick during the 1930s and ’40s. But all good things have to come to an end sometime; and director Jon S. Baird takes a warm-hearted look at the twilight of their careers in Stan & Ollie.

Baird is probably best known as the director of Filth [2013], so this is a radical change in style for him. He’s been doing television in the intervening years – including Vinyl and Feed the Beast – so that might have shaped his turnabout. He imbues the whole film with a kind of golden glow. Not just the glow of nostalgia – though that’s present – but the glow of genuine friendship and empathy. 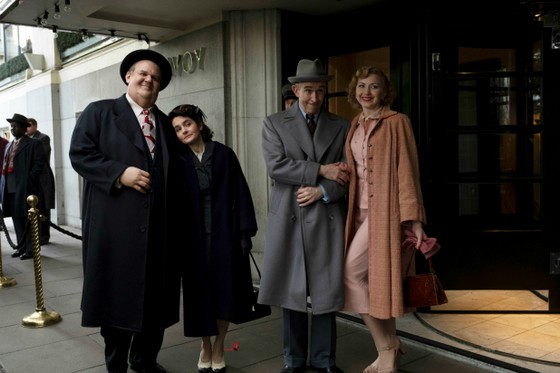 A brief prologue shows Stan Laurel (Steve Coogan) and Oliver Hardy (John C. Reilly) back in the “old days” of the 1930s. Fast forward to the 1950s, and the pair have arrived in Britain for a music hall tour. They’re both older of course, and in Ollie’s case, rather heavier. Things don’t get off to a great start when they discover the hotel at their first stop is a kind of glorified boarding house. But the show must go on as they say, and season performers like Stan and Ollie aren’t about to let their fans down. Relentlessly upbeat promoter Bernard Delfont (Rufus Jones) isn’t deterred – at least outwardly – about poor crowds early in the tour. However he raises the prospect of perhaps cutting the tour short.

This won’t do for Stan and Ollie though. They have to meet a film producer in London (the scheduled final stop on the tour) to discuss a long-mooted Robin Hood spoof. The opportunity for this “just one more” movie was the only reason they agreed to the tour in the first place. Then Delfont comes up with a masterstroke. He convinces the comedians they need to do more promotion – photo ops, meeting local dignitaries, that sort of thing. Reluctantly they agree – but soon they’re playing to packed houses.

Screenwriter Jeff Pope (Philomena) clearly loves his characters, and his original screenplay allows Coogan and Reilly room to explore them. He keeps things tight, and drives the film to a really satisfying conclusion. Pope – and Baird for that matter – also owe a debt of gratitude to production designer John Paul Kelly (Bridget Jones’s Baby) and cinematographer Laurie Rose (Overlord) for their gorgeous re-creation of the era. But Pope’s script isn’t just about hero worship. He draws out the foibles in his characters. And he masterfully explores the human side Laurel and Hardy’s professional and personal relationships.

But you can’t have Stan & Ollie without Laurel & Hardy. Baird lovingly reenacts some of the pair’s most memorable moments, including the famous “boiled eggs and nuts” sketch. The result is pretty much flawless; as confirmed by the original footage included in the end credits. At one point, a character mentions the duo are still doing the “same old material”. That’s certainly true – and that material seems pretty dated now – but clearly it tapped into something at the time.

The casting of Steve Coogan and John C. Reilly is a masterstroke. I was worried the storied actors might overwhelm the characters; but they slip right into them. Although they mimic some mannerisms, they both inhabit the characters to the extent you forget you’re watching Coogan and Reilly. Rufus Jones is also excellent as the rather smarmy Delfont. And Shirley Henderson and Nina Arianda just about steal the show as Lucille Hardy and Ida Laurel respectively.

While it’s a minor film in some ways, Stan & Ollie is enjoyable nostalgia. But in the end, this is about two friends who just happen to be comedy idols. Even if you’re not a fan of comedy movies from the early 20th Century, Stan & Ollie delivers a lot to like.