Overlord starts out as a WWII action movie; but late on turns into a zombie flick. 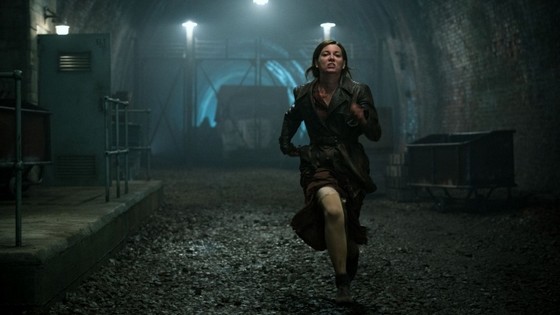 The story takes place on the eve of D-Day during World War II. American paratroopers are caught behind enemy lines. With their leader killed, explosives expert Cpl Ford (Wyatt Russell), takes control to keep the few that remain alive on track for their mission. They’re out to destroy a German radio tower. What they come across is far more horrific than they expected. Not only is the place overrun by ruthless Nazis, but they have instigated secret experiments that turn humans into something else entirely.

The young cast does a good job with the material. I felt a genuine affinity for them. Mathilde Ollivier exudes empathy and strength in a fearless portrayal as the heroine, Chloe. She provides shelter for the Americans. Morality is at the core of Jovan Adepo’s portrayal as a new army recruit, Boyce, who has his eyes opened mighty fast. While decidedly grating, John Magaro does what is asked of him as the smart alec of the troop, Tibbet. He provides humour too in his interaction with Chloe’s young brother, Paul (Gianny Taufer).

The atrocities of Nazi experimentation are brought into sharp focus. I was genuinely horrified by some of it.

I had no idea what I was in for with Overlord. Its change of tack caught me completely unaware. I loved that and appreciated the efforts of screenwriters Mark L. Smith and Billy Ray, and director Julius Avery (Son of a Gun).