Last year we saw the excellent documentary RBG, a comprehensive and insightful look at the life and legacy of Ruth Bader Ginsburg, the diminutive lawyer and champion of human rights and gender equality who became the second woman ever appointed to the bench of the US Supreme Court. Ginsburg, who graduated at the top of her class at Columbia, is a feminist icon and the “rock star” of the legal profession. She’s also the voice of reason on an increasingly right-wing bench. The well-meaning biopic On the Basis of Sex covers some of the same territory as the documentary but comes across as a little dry and prosaic by comparison. 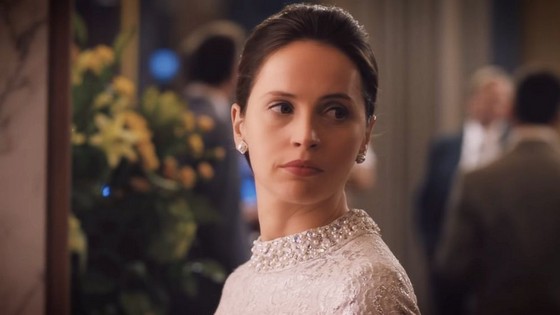 On the Basis of Sex follows Ginsburg’s early struggles to be taken seriously by the legal profession. It opens in 1956 when Ginsburg (Felicity Jones) was one of a handful of women admitted to study law at Harvard. The school’s overtly sexist dean (Sam Waterston) is skeptical of them, suggesting that they have taken the place that should have gone to a man. During her first couple of years Ginsburg had to work twice as hard to constantly prove herself, especially after her supportive and loyal husband Martin (Armie Hammer) was diagnosed with testicular cancer.

The film explores in some depth her loving relationship with Martin, a tax attorney with a top New York law firm, and her prickly relationship with her daughter Jane (Cailee Spaeny) herself a passionate advocate of certain feminist causes. The film follows her years as a teacher and all the way up to her first court case, when she takes on the case of Charles Moritz (Chris Mulkey), a single man who is being refused a tax exemption for caring for his invalid mother on the basis of his gender. Ginsburg recognises the potential legal ramifications of a successful appeal in this landmark case. With the aid of Martin and Mel Wulf (Justin Theroux), a passionate lawyer from the American Civil Liberties Union, she takes on the case. Her successful arguments led to several other precedent-setting cases based on gender equality and paved the way for her eventual appointment to the Supreme Court.

On the Basis of Sex deals with big themes like gender equality. It exposes the patriarchal nature of society in the 50s and 60s when women were expected to remain at home. The script has been written by first time writer Daniel Stiepleman, who just happens to be Ginsburg’s nephew, so he has a personal investment in the drama. The film is however a little predictable and melodramatic in nature.

This marks the return to the big screen for director Mimi Leder (The Peacemaker) after nearly two decades working in television. Her handling of the material is fairly conventional and straight forward in style, and lacks any great sense of urgency. There are no great courtroom pyrotechnics or trial sequences that show off her legal skills.

Jones (Rogue One) is very good in the role, capturing Ginsburg’s steely determination to prove herself while constantly being underestimated by the men in power around her, her dogged pursuit of justice and equality under the law, and her feisty, steely quality. Hammer (Call Me by Your Name) has a solid presence and brings warmth, charm and empathy to his performance. Kathy Bates has a small but showy role as veteran lawyer and activist Dorothy Kenyon, while Waterston (Miss Sloane) is perfectly cast as the officious Dean Griswold.

Costume designer Isis Mussenden (The Chronicles of Narnia) captures the era perfectly, and she has recreated many of Ginsburg power fashion outfits.

On the Basis of Sex covers the early years of Ginsburg and her rise through the legal profession. But ultimately it lacks the depth and insight of the documentary RBG and doesn’t leave the same lasting impression on the audience.