– The Mystery of Henri Pick – 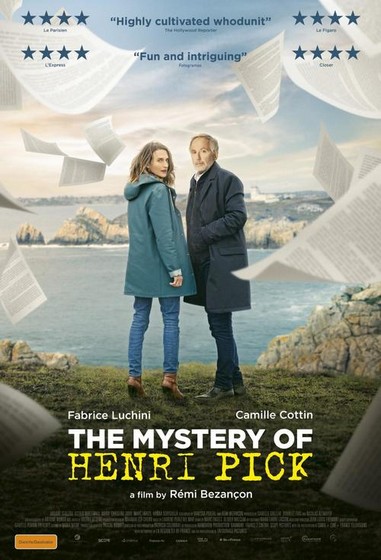 We have 10 double in-season passes thanks to Limelight Distribution.

Based on David Foenkinos’s 2016 book of the same name, The Mystery of Henri Pick revolves around the film’s enigmatic title character who, two years after his death, has his name sprawled across the covers of a celebrated novel, The Last Hours of a Love Story. However, not everyone is convinced of the author’s authenticity of this overnight sensation. Amongst the cynics is influential literary critic Jean-Michel Rouche (Fabrice Luchini) who sets out to discover the truth behind Pick and the book that bears his name. Camille Cottin co-stars as Joséphine Pick, daughter of the mysterious author, who reluctantly assists Rouche in navigating the secretive Breton landscape. The Mystery of Henri Pick has twists and turns that would make Agatha Christie blush, and wears its love of literature on its sleeve. With many references to literary giants – from Alexander Pushkin to Marguerite Duras, this film is a well-crafted puzzle that will captivate and excite.

For your chance to win, enter your details below and put “Henri Pick” in the answer section