We find suggestions of child abuse abhorrent; but it wasn’t always so. Traditional fairy tales (like those of the Brothers Grimm) often include elements of adults being unspeakably cruel – or worse – to children. Indeed, in more recent times, writers like Roald Dahl haven’t shied away from including childhood hardship in their fiction. Netflix’s animated adventure The Willoughbys fits neatly into that mould. In fact, you could see it as a kind of Cinderella-in-reverse. 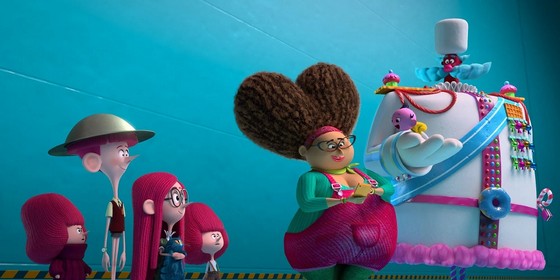 The Willoughbys live in an “old-fashioned” house in the middle of a large city. Four children – Tim (voiced by Will Forte), Jane (Alessia Cara) and twins both named Barnaby (Seán Cullen) – live a miserable existence at the hands of their selfish, clueless parents Father (Martin Short) and Mother (Jane Krakowski). They have so much love for each other, they don’t have any “left over” for their children. But chance encounters with an orphan named Ruth, and Commander Melanoff (Terry Crews), an eccentric candy mogul, lead Jane to hatch a devious plan. She proposes to send Father and Mother on a long – and very dangerous – trip under the guise of a fake travel agency. By doing so, the children will “orphan themselves”, and escape. Of course, the gullible parents fall for it. But before setting off, they hire a “cheap, not good” carer for the kids in Nanny (Maya Rudolph).

Co-directors Kris Pearn, Rob Lodermeier and Cory Evans lean into the fairy tale elements of the script. Pearn led the screenwriting team to adapt Lois Lowry’s book of the same name. But the directorial team also riff on elements from other recent movies, including A Series of Unfortunate Events and Stuart Little. The result is a rollicking adventure, filled with humour and a little pathos, that works for both kids and adults. And while I didn’t find it hard to work out where the film was going, the journey to get there is well worth taking.

Yes, there are echoes of child abuse here; but if anything (based on our small sample size at home) the adults will be more concerned about it than the children. But the film’s relentless optimism and quirky sensibility should overcome any lingering quibbles.

Kyle McQueen, the art director and production designer, is the real star here. He creates an amazing visual world that really complements the off-beat story. He pays close attention to every detail – down to the characters’ wool-like hair – to bring the tale vibrantly to life. I particularly enjoyed the Barnabys – even though they don’t say much, they provide great “colour” to the film. Mark Mothersbaugh adds an impressive jazz-influenced soundtrack.

The voice talent work overtime with some complex dialogue. Despite his top billing and comedy credentials, Will Forte (Booksmart) has to play the straight man for much of the film. The really funny dialogue falls mainly to Maya Rudolph (The Good Place) and pop princess Alessia Cara. And Ricky Gervais adds an idiosyncratic note as the narrator, a large blue cat.

I watched The Willoughbys on a whim while looking for something the family could enjoy together during lockdown. It turned out to be a winner. I suspect kids might embrace it a bit more than adults, but if you want something to keep everyone thoroughly entertained for 90-odd minutes, this is well worth checking out.

The Willoughbys is now showing on Netflix