The starting point for the truly horrible Butt Boy is a guy in a bad marriage who enjoys inserting objects into his rear end.

We’re in Florida. Chip Gutchel (Tyler Cornack) – a bored IT engineer in a dead-end job – has an awakening after a routine prostate exam. He really enjoys it. What begins as a harmless rectal kink soon grows into a dangerous addiction as Chip becomes responsible for a missing child. 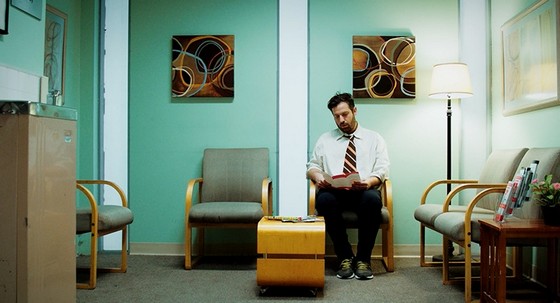 Nine years later and still in the same job, Chip has become an Alcoholics Anonymous sponsor. A dishevelled new client, Russell Fox (Tyler Rice), comes to one of the meetings and Chip is assigned to look after him. It turns out Fox is a detective. Gutchel has a bodily relapse. Another child disappears and … you guessed it, without any knowledge of Gutchel’s nefarious past, Fox is sent to investigate.

The film’s lead, Tyler Cornack directs, and wrote the script with Ryan Koch. Butt Boy started off as a joke and, according to Cornack, remained that way until it was finished. The preposterous premise was first the subject of a short before Cornack expanded it. Despite its inherent silliness, the filmmakers play a straight bat throughout.

In all good conscience, this is a film I couldn’t recommend to my worst enemy … if I had one. Bizarre, cringe-worthy, D-grade fare, it is a shlock horror with the darkest of so-called humour. The script is a giant leap off the deep end, and the acting excessive. The experience itself is enough to turn one off feature films forever. To say the film is an ordeal to sit through is an understatement.

Annoying, ponderous music and dreary slow-motion scenes are early hallmarks. The longer the picture goes the more obtuse it becomes – until the final act, when it really loses it. Quite frankly, I have no idea who a film like this would appeal to. In America, perhaps college kids who will laugh at almost anything. I fail to see the joke, if there is one.

Butt Boy is vulgar and depraved, something to be avoided at all costs. The description “toilet humour” doesn’t do this the injustice it deserves.