In 2016 we had the graphic animated comedy Sausage Party. Some absolutely hated it, while others regarded it a work of raunchy comic genius. Well, here we go again; as puppetry interplays with live action in The Happytime Murders. 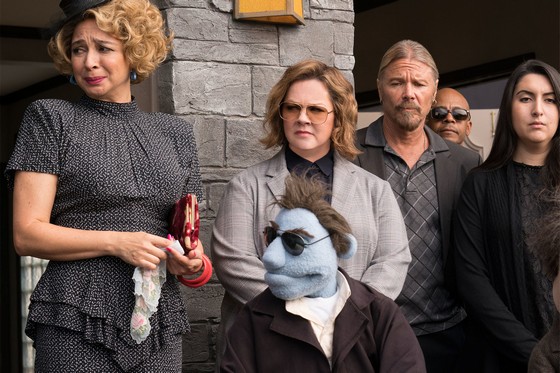 The film is many things: a murder mystery, a buddy cop story, a tale of diversity and inclusion and a fallen hero’s story of redemption. Set in Los Angeles, it explores a world where humans and puppets co-exist. In this community, puppets run the gamut of personalities, occupations, interests and vices. But they’re viewed as second-class citizens and must contend with discrimination and violence as they attempt to find their place in the world.

The film focuses on the fractured relationship between LAPD Detective Connie Edwards (Melissa McCarthy), a volatile veteran of the force; and Phil Phillips (the voice of Bill Barretta), her disgraced puppet former partner. They were once the pride of the department until an incident led to Phillips’ dismissal. Phillips is now a private investigator, “fighting for the felt” in the City of Angels. When several cast members of The Happytime Gang – a beloved children’s program from the 90s – are murdered, Edwards and Phillips grudgingly reunite to track down the serial puppet murderer.

Having delighted generations with their puppet creations in both television and films, The Jim Henson Company extends its legacy with The Happytime Murders. It’s the first feature film from Henson Alternative, the company’s banner for exclusively adult content. Brian Henson (Muppets Tonight) – Jim’s son – directs from a screenplay by Todd Berger (Cover Versions).

I found the film clever, but not totally fulfilling. There were laughs and shocks, but also flat patches – quite a few of them actually.When the laughs fell flat, you really felt it. On the positive  – or negative, depending on your viewpoint – side, is an “X-rated” scene involving the private eye pleasuring a client. I thought the best character was he PI’s PA, Bubbles (Maya Rudolph); while the film also features Elizabeth Banks.

Melissa McCarthy’s character trades barbs with her former partner, but that thrust and parry began to wear. The idea of puppets being second-class citizens though works well. So, The Happytime Murders scores highly for originality, but considerably lower for sustaining interest.