Four lifelong friends (represented as women in their 60s) have their lives turned upside down when their book club – of four – tackles the infamous E.L. James’ novel Fifty Shades of Grey. 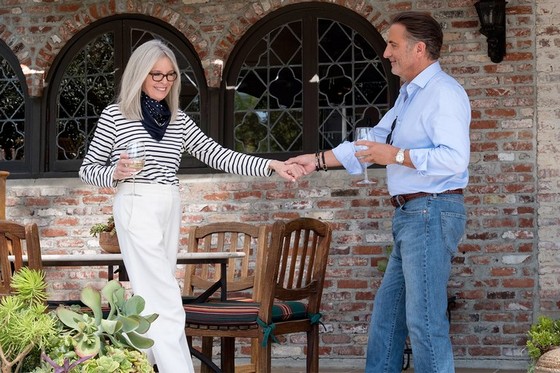 Diane (Diane Keaton) is recently widowed after 40 years of marriage. Successful and single-minded business woman Vivian (Jane Fonda) enjoys her men with no strings attached. A stalwart of the legal fraternity, Sharon (Candice Bergen) is still working through a decades-old divorce and doesn’t date; while Carol’s (Mary Steenburgen) marriage is in a slump after 35 years. From discovering new romance to rekindling old flames, this quartet inspires each other to make their next chapter their best chapter.

An unabashed feel-good flick in the vein of Mamma Mia!, this is what I term a third generation comedy. Bill Holderman (A Walk in the Woods) and Erin Simms provide the script; while Holderman also directs for the first time.

A stellar cast keep the laughs flowing. Each of the four principals is given their time to shine. Jane Fonda looks fabulous and still has that movie star glow that has endeared her for generations. Her control of the material remains impressive. Candice Bergen’s delivery is spot on, as always. She really knows how to deliver on cue. Her wit is evident.

Beyond the four principals, the supporting cast secured is also mighty impressive. How’s this for a list?: Andy Garcia, Don Johnson, Craig T. Nelson, Richard Dreyfuss, Ed Begley Junior, Wallace Shawn and Alicia Silverstone. Off the bat then, there are at least 11 noteworthy names in the cast.

Much of the storyline is signposted early on and the jokes are largely predictable, but it’s still quite endearing. I dare say there will be a large audience of a certain age bracket who will really enjoy what is served up. This is a movie that clearly knows its target market.