The Melbourne-shot drama West of Sunshine is an exploration of a troubled father-son dynamic. The film follows the plight of Jim (Damian Hill), an inveterate and hapless gambler who’s trying to pay of a $15,000 loan to a ruthless loan shark (Tony Nikolakopoulos). He has until five o’clock to pay off the debt or there will be serious consequences. Jim works as a courier driver delivering packages for his company. Because of his gambling habit and his mounting debts, he’s separated from his wife. 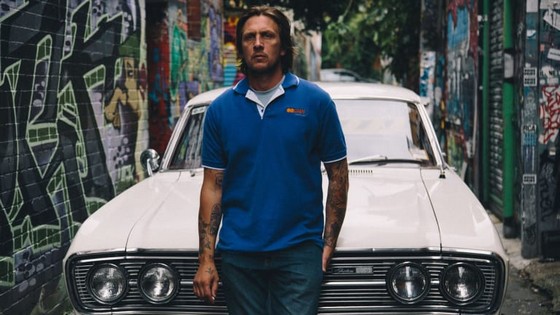 But on this crucial day, he’s left in charge of his young son Alex (Ty Perham) because it’s still school holidays. Alex likes soccer and playing games on his mobile phone. He and Jim have little in common.

Jim’s grand scheme to earn the money through one big gamble on the horses looks set to pay off, until his flawed nature gets the better of him. As the day draws to a close though, Jim and Alex are drawn closer together by their shared experiences, which prove something of an eye opener for the naïve youngster.

Hill previously wrote the superior Pawno, which was set in the similar milieu of Melbourne’s working-class western suburbs. His Jim is also something of a familiar character for the actor and he seems a comfortable fit. However, his performance seems to lack the necessary air of desperation. Newcomer Perham is his step-son in real life, which adds to the realism of the bond and the on-screen rapport they share.

West of Sunshine is the debut feature for local filmmaker Jason Raftopoulos. It’s essentially an extension of his 2011 short film Father’s Day. But in stretching the 11-minute short out to 78 minutes, its flaws become written large on the screen. There are a few pacing issues, as Raftopolous takes his time in getting the characters to places of interest or drama. The film looks great though thanks to the lensing of cinematographer Thom Neal (his first feature) who has captured the familiar streets and landmarks of Melbourne, adding authenticity to the locations.

Raftopoulos has cast many locals and non-professionals in small roles here which also adds to the sense of gritty authenticity. This film though lacks the intensity and explosive drama that filmmakers like Scorsese or Paul Schrader brought to similar material.