You can see the raw emotion; feel it; you can almost taste it in the reflective and haunting drama Leave No Trace.

Some films mark the breakthrough role for an actor. I’m thinking, for instance, of Winter’s Bone for Jennifer Lawrence.That’s the case here for New Zealander Thomasin McKenzie, who is stupendous as a dutiful daughter living off the grid with her PTSD-affected father. 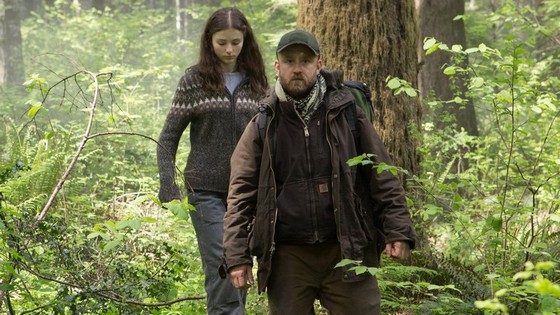 Ben Foster (Hell or High Water) is pretty great too as the insular father, Will. He’s not a big talker, but he carries in him an intensity. We know nothing of their back story, other than the fact that they are alone … together. Will’s wife died and his now teenage daughter Tom (McKenzie) barely remembers her. He can’t be around people for too long. He craves isolation. She hasn’t had a formal education, rather been home-schooled by him. When I say home schooled, they don’t actually have a home.

They live in the wilderness and move from place to place. At the start of the film though, they’ve been in Forest Park – a vast wood on the edge of Portland, Oregon – for some years. When the pair is discovered, as a result of a chance encounter, their lives change. Tom comes to recognise her needs are not Will’s and vice versa.

The real-life story that Leave No Trace is inspired by has become something of a legend in Portland. A girl and her father were discovered to have been living for four years in a nature preserve bordering the city’s downtown area. Writer Peter Rock, intrigued by the mystery, created a fictionalised version of the tale that filled in the unknowable details. That became his novel, titled My Abandonment.

Writer and director Debra Granik thought about Shakespeare’s The Tempest, with its father-and-daughter characters of Prospero and Miranda. Will and Tom look out for each other and also pollinate each other’s minds. Tom has learned to be the adult at times, because of her father’s psychiatric vulnerability. He, in turn, is trying to teach her every useful thing he knows.

Leave No Trace tells the story of two people who forge their own path, with no villain in the tale. Clearly Granik has an appetite for stories that don’t rely on violent actions but still have strong resonance. What makes this such a memorable movie requires a multifaceted explanation. It is the nuances in the acting of course, but it is also the writing. Incidentally, Granik and her co-writer Anne Rosellini were also behind Winter’s Bone. And then there are the settings and cinematography by Michael McDonough (Albert Nobbs).

Leave No Trace is a very special film aimed at an adult audience that appreciates fine independent cinema.