After taking on vampires (What We Do in the Shadows) and superheroes (Thor: Ragnarok), hugely talented NZ director Taika Waititi takes on Nazis in Jojo Rabbit. But unlike the breezy charm of those films, this time Waititi goes to some very dark places. 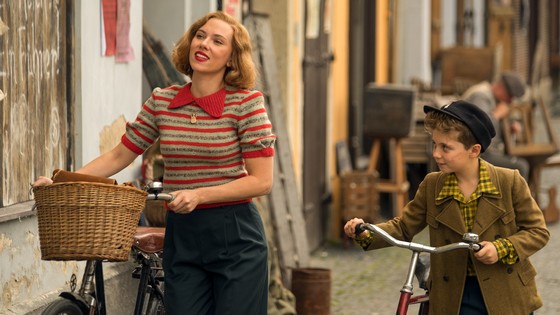 Jojo Rabbit is a cautionary tale about the dangers of “drinking the Kool-Aid”. Waititi explores fanaticism and its accompanying fantasies and lies. Given the serious subject matter, it’s not surprising the film takes dark turns. Alongside them, he stages several funny – even hilarious – scenes. Both elements work; but I’m not sure they work together.

Ten year-old Johannes – known as Jojo (Roman Griffin Davis) – lives in a small German town with his mother Rosie (Scarlett Johansson). It’s late in World War II. The Allies are closing in, but life largely goes on as before. That means Jojo has to join the local Nazi youth chapter. He’s excited to go, since he’s a big fan of old Adolf Hitler. So much so that Hitler (Waititi) – or at least Jojo’s concept of Hitler – is his imaginary friend. But once at the youth camp, things don’t go smoothly for Jojo.

The camp leader, Captain Klemzdorf (Sam Rockwell) is a jaded veteran who’s lost the sight of one eye. His approach to the camp is, well, lackadaisical at best. The zealous Fraulein Rahm (Rebel Wilson) tries to inject enthusiasm; but often times only makes things worse. But when Jojo is seriously injured, things really run off the rails. Jojo and Rosie try to carry on as best they can, but things have changed. Then Jojo’s world-view is upended when he discovers a mysterious stranger named Elsa (Thomasin McKenzie) living in their attic.

The film develops its central thesis though Jojo’s interactions with Rosie. She leads him to question what he’s always accepted. Characters act in unexpected ways, home truths are told, and tragedy strikes more than once.

Punctuating it all though is Waititi’s rather manic Adolf. As noted, this isn’t meant to be the “real” dictator but rather Jojo’s concept of him. The sight of the hated figure behaving like a 10 year-old boy is disconcerting to say the least. These scenes introduce an element that doesn’t really gel with the remainder of the film; particularly in the latter stages when the war literally comes to Jojo’s doorstep. The tonal shifts are dramatic and often jarring. A scene with a bunch of Gestapo is played for laughs; but the scene has a very dark counterpoint a few scenes later.

Despite my issues with the film’s tone, the balance of Jojo Rabbit is a vibrant fantasy. Despite its grounding in real events, the film obviously isn’t historically accurate by any means. Taken as allegory, the film works on a number of levels; thanks mainly to Waititi’s clever script adapted from Christine Leunens’ novel Caging Skies. It might seem odd in a film that includes a manic imaginary Hitler, but Waititi’s script is actually quite nuanced. You need to pay attention to pick up on the clues, because he doesn’t lay everything out for you.

Roman Griffin Davis gives a fabulous performance in the title role. He’s in just about every scene, and his naive charm propels the film along. I enjoyed both Sam Rockwell (Vice) as the war-weary Klemzdorf and Rebel Wilson (The Hustle) as the rather zany Fraulein Rahm. But the film only succeeds because of the key supporting roles of Scarlett Johansson (Marriage Story) – who’s having quite a year – and Thomasin McKenzie (The King) as the two women in Jojo’s life.

Despite some reservations, I enjoyed Jojo Rabbit. This is an audacious effort from Waititi and takes him into new territory as a filmmaker. It won’t be for everyone, but it’s a film with an important message that will resonate with many viewers.