Prince Hal (Timothee Chalamet) was never destined to become king of England. He was a playboy, drunkard and womaniser, and his tyrannical father Henry VI (Ben Mendelsohn) passed him over in the line of succession for his younger brother Thomas (Dean-Charles Chapman). But England at that time was a land in chaos, divided by years of war and civil unrest. Hal was opposed to his father’s desire for war. 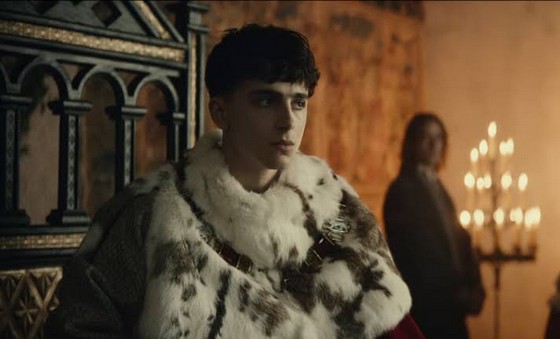 But when Thomas is killed in battle in Wales, Henry VI reluctantly appoints the young Hal as heir to the throne. When he becomes king, Henry V’s main aim is to unite his kingdom and bring peace and prosperity to the land. But one of his chief advisors William (Sean Harris) and the ambitious Archbishop of Canterbury (Andrew Havill) manipulate the young king into a war against the French. It was the victory against the French army of Charles II at the battle of Agincourt that cemented his reputation, and, despite the fact that he reigned for only a decade, Henry V is regarded as one of England’s great monarchs.

The story has been told before, notably by Laurence Olivier in his Oscar winning 1944 film and Kenneth Branagh in his 1989 film. Both those two actors drew on the Shakespeare plays about Henry for their inspiration, but with this revisionist take on the character both director David Michod (Animal Kingdom) and co-writer Joel Edgerton take liberties with the story, mixing fact and fiction. They eschew the Bard’s flowery language and poetry and his rousing St Crispin’s Day speech for a more contemporary feel that’s more in keeping with Game of Thrones. With its study of power dynamics, family and treachery this film also shares a number of thematic similarities with Michod’s acclaimed, award winning breakthrough drama.

At 23 years of age, Chalamet (Call Me By Your Name) is closer in age to the real Henry than either Olivier or Branagh, and he continues to impress as one of the finest young actors of his generation. Cast largely against type here he brings both a naivety and intelligence to his performance as he grows in strength from callow youth to reluctant monarch. He ably captures the physicality of the role for the battle sequences, but he also conveys his doubts and insecurities. Edgerton is also solid and brings weight and gravitas to his performance as his trusted advisor Sir John Falstaff, whose key understanding of military tactics and strategies proves decisive at Agincourt. Robert Pattinson contributes a strange flamboyant performance with limited screen time as the arrogant and eccentric Dauphin, the heir to the French throne, and his outrageous faux accent provides some comic relief.

The film has been nicely shot by Adam Arkapaw (Snowtown), who atmospherically uses shadow and light effectively for the interiors. The climactic battle of Agincourt is superbly handled and shaped by editor Peter Sciberras (The Rover). Michod captures the mud, blood and chaos of the battle, and his muscular staging of the key action sequences is reminiscent of Mel Gibson’s Braveheart. Implicit in the film’s subtext though is a criticism of warfare and imperialism.

The fifteenth century comes alive through the superb production design from Fiona Crombie (The Favourite), and the authentic looking costumes from Emmy winner Jane Petrie (The Crown).

The King was produced under the auspices of streaming giant Netflix, but this deserves to be seen on the big screen for best effect.